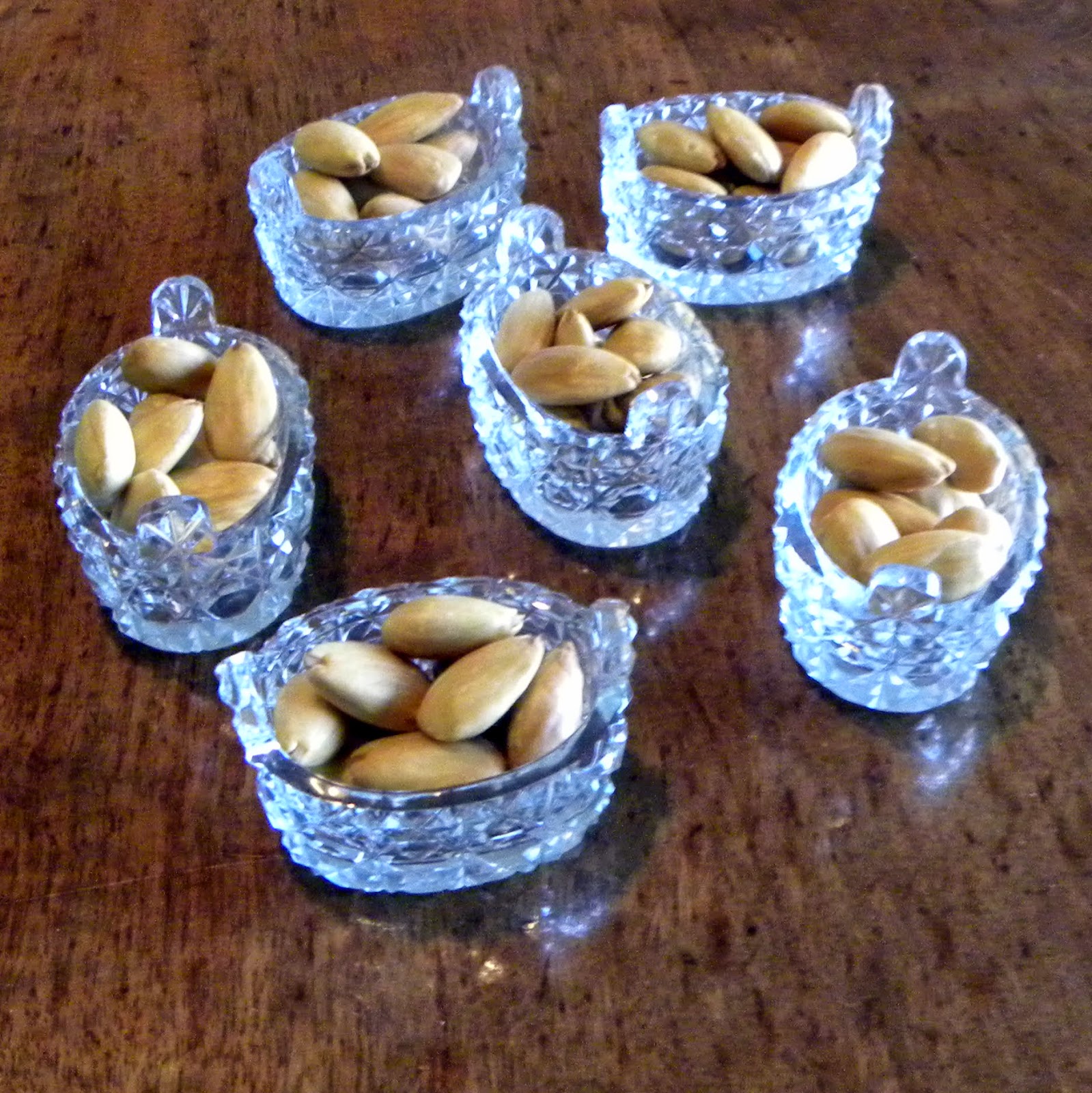 These are an old family tradition from my Dad's family, originally served in small individual cut-glass nut cups with holiday dinners.  I serve them for hors d'oeuvres at Thanksgiving and Christmas time. I also put some in decorative jelly jars or small festive bags for holiday gifts for friends. 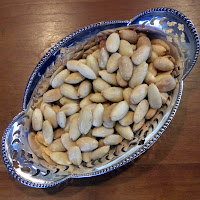 First, blanch the almonds by placing them in boiling water and letting them sit for a few minutes until the skins begin to pucker, the less time the better. Pour nuts into a colander to drain the water. Slip the skins off the almonds (I remember helping Dad do this, then he would do  the roasting) and place the almonds on a cookie sheet covered with a couple layers of paper towels to dry. Blanched almonds may be kept for a few days before but much better to roast right away.so nuts are more evenly moist.


Preheat oven to 300 degrees F, use convection mode if available.

To roast nuts, place almonds on a non-stick cookie sheet(s) in a single layer and place in heated oven. Stir every 5 minutes for the first 10 minutes than every 2 minutes until the nuts become barely golden. Do not overcook or the almonds will be tough; when testing for doneness by taste be sure nut is as cool as possible as warm almonds are not as crisp as cool ones. It is better to remove almonds from oven and cool, then return if not crisp enough than to overcook. I usually cook for 15-20 minutes total,
When my Dad, Ja, made these almonds he would stir a tablespoon of butter (per cookie sheet) into the warm almonds and salt them lightly. I do not add anything. 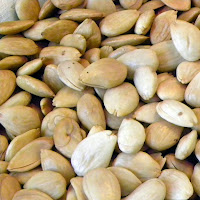 January 2014: Because Chris says I should write about my failures as well as successes.   Almonds were a disaster last (2013) year, both at Thanksgiving and Christmas. I blanched them and then let them dry on paper towels for a day or two. I cooked them for the first ten minutes (standard oven) then checked them every two minutes. Some seemed to brown, some stayed quite white (see photo at left).
When they cooled some of the white ones were actually crisper than the browned ones, certainly a variation in terms of doneness. 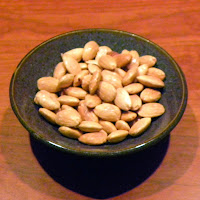 New Year's Eve I had just a few raw almonds left so decided to roast them.  I blanched then, dried them with a towel then put them directly in the oven at 300 degrees F.  Since the convection oven at Alex and Dan's had done a second Christmas batch pretty well, I elected the convection option. Must have been the "watched pot effect" before because this time I cooked them 10 minutes, stirred, cooked another 5 minutes, stirred and cooked a final 5 minutes (I had started with fairly moist nuts).  These nuts (at left) were all evenly browned and evenly crisp.   Ironically, with no guests the best nuts of the holiday season.*

*  Lesson learned, though Ja never used one, - use convection oven if available.