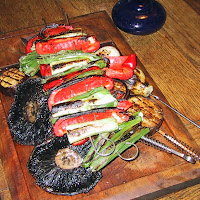 Serves…. number is set by how many veggies you cook; more guests, more veggies. A selection of Grilled Veggies and Rosemary Chicken make a great summer company dinner.  Since all veggies are not in season and the same time, the mix will vary accordingly. 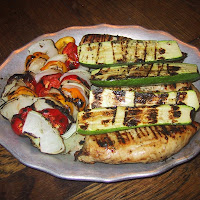 Brush veggies on both sides with:

Marinate for about an hour.

If desired for ease of cooking, put potatoes on skeweres, as well as peppers and/or onions if cut into smaller square pieces.

Grill over medium heat, turning frequently just until veggies are tender - some will take much longer than others (asparagus takes very little time and must be turned constantly) - do not char or burn! Remove from grill and cut any large pieces into smaller serving size  pieces.

* If peppers are long and skinny cut in half lenghtwise.  If cooking on skewers is preferred, cut peppers into 3/4-inch to 1-inch square pieces.
** Alternatively onions may be quartered,  then quarters halved and cooked on skewers after marinating.

When Alex and especially Christopher were younger they were not fond of mescaline or “spring mix” and hence called these greens “weeds”. They like them now, but the term “weeds” has stuck.

Cover bottom of a ~2” deep serving dish or large platter with:

Arrange some/all of the following on top of the weeds keeping each ingredient in separate area:

Dress with (or allow guests to dress their own salad):

Good Seasons Italian Dressing made with balsamic vinegar or your favorite oil and vinegar
dressing.  Since veggies have already been marinated, salad will require minimum, if any, dressing.

When grilling oriental eggplant and sometimes asparagus, instead of marinating in a balsamic dressing, I brush these veggies with sesame oil or toasted sesame oil just before grilling.

August 2017: For a simple dinner for just Ed and me, we often do a single veggie or just a couple. Ed sprays/brushes the veggies with olive oil (or sesame oil) before and while cooking.   After years of cooking potatoes on skewers, we now parboil til tender, dry and toss with olive oil and cook directly (without skewers) on the grill