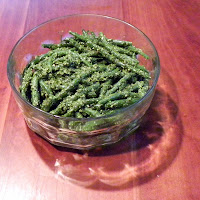 This is a favorite recipe from Sarah Leah Chase’s Nantucket Open House Cookbook. It is easy to make ahead of time so excellent for entertaining.

I think the cherry tomatoes make the salad, I use small ones and leave them whole; red ones are good for the Christmas holiday, red, yellow and orange when in season in late summer. 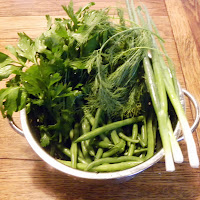 Heat a large pot of water to boiling. Add and boil until crisp-tender [about 3 minutes]

Drain immediately, then immerse in a large bowl of ice water to prevent further cooking and retain the bright green color. 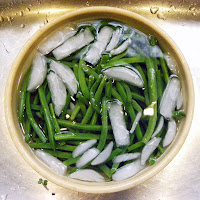 Meanwhile, make the sauce: Place in a blender or food processor fitted with the steel blade and process until smooth: 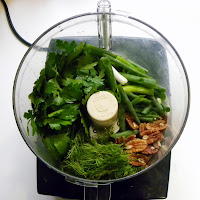 With the machine running, pour in a thin, steady stream through the feed tube to make a thick green sauce:

Drain the beans and dry with a towel. Toss the beans with the dressing in a mixing bowl. 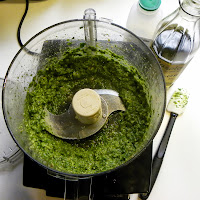 Transfer the beans to a serving bowl. Serve slightly chilled or at room temperature.

[VARIATION: Use basil pesto instead of dill pesto] 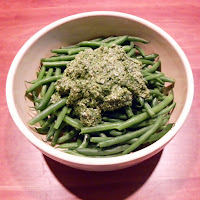 July 2013: I had not made this salad for a while and needed photos. Unfortunately no cherry tomatoes were in season yet, but the salad was so well received I'm going to do it again soon with the season's first cherry tomatoes.  Yum!  Revisiting the recipe, the amount of olive oil  seemed excessive so I reduced it to 1/2 c for a half recipe and was not later tempted to add more. And, since I had no walnuts and lots of pecans, I used pecans which worked well.  This recipe is for a large salad so I often halve the recipe (all photos are halved-recipe). Although Ms. Chase advises, "Serve slightly chilled or at room temperature", I much prefer the room temperature version. 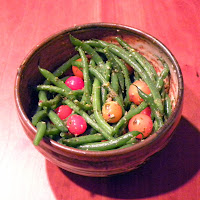