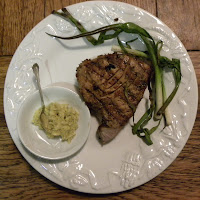 This recipe is adapted from a recipe of same name from Sarah Leah Chase’s Cookbook Nantucket Open House  My recipe has fewer ingredients and makes considerably less marinade so turning the fish is even more important.

This is a boat favorite when tuna is in season and easily obtainable along the coast.

In this marinade place:

In this marinade place: 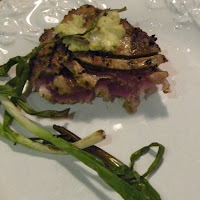 Marinate for 1 to 4 hours in shallow pan placed in refrigerator, turning the fish occasionally.

Remove tuna from marinade and place on heated grill. As tuna cooks, baste with some of the remaining marinade. Grill until tuna is warmed through but still red/pink in the middle. I like it rare - red in the middle  - see photo at left. Cooking time will depend on heat of grill and thickness of tuna. Chase cooks 5 to 6 minutes each side, we cook less. Tuna will keep cooking after it is removed from the grill.

Serve with wasabi butter made by mixing:

* If using powdered wasabi, make wasabi paste by mixing green wasabi powder and water to a paste-like consistency, then mix with butter. Amount of wasabi used will depend both on the hotness of the wasabi and individual taste.

* May 2017: Note:  There is a great variation in  powered "wasabi:". some is mostly all horseradish and mustard and some is 100% wasabi.  Christopher introduced me to the latter, Sushi Sonic Real Wasabi. when he was living in Brooklyn.  The ultimate, he tells me, is fresh wasabi, but even in NYC this is dufficult to find.