My earliest sugaring season memory is probably having warm maple syrup poured over one of Mrs. Cole's (a friend of my grandparents)  homemade doughnuts in her New Hampshire farmhouse. I also remember going to the Campion's New Hampshire farm and helping their large family and other friends, along with my parents and brother, gather the sap. We then hung out in the smokey sugar house and, since this was not a commercial operation, cooked hot dogs and eggs (until hard boiled) in the boiling sap in the evaporator. Approximately 40 gallons of sap yielded one gallon of maple syrup.


Later came sugar on snow after informal spring ski races and then the annual "Sugaring-Off Party" with Alex and Chris at the sugar house behind the Weston (MA) High School (now Land's Sake Sugar House). The sugar maples around Weston were tapped with galvanized spiles (spouts), their sap flowed into galvanized buckets and was collected by hand and put in large vats on a sled or wagon pulled by horses or a tractor.  The open evaporator was fueled by wood that sometimes imparted a slightly smokey flavor to the finished product. To decrease boiling time, evaporators have evolved to maximize the heated surface to which the sap is exposed.*


I love good maple syrup and use it throughout the year for special breakfasts and other dishes. This year when I needed to replenish my supply, my most recent source of maple syrup was already sold out. All gone, Norah said, "It was a really crummy season." So last weekend when Ed and I were in New Hampshire we stopped at one of our other favorite maple syrup sources, Sunday Mountain Maple Farm (no longer sugaring). The owner, Paul Messer,  greeted us and though he still had plenty of syrup to sell, the unseasonably warm weather stretch in March had hurt his production too.  Just as our daffodils blossomed early, the sap run, which favors warm days and freezing nights was stopping. The typical season in Orford, New Hampshire ends somewhere between the 1st and 10th of April.  This year it ended for Sunday Mountain Maple Farm on March 18th, yielding only 40% of a typical year's production.   In addition to the "early summer", there may have been other contributing factors.  In  On Food and Cooking  Harold McGee notes, "The sap run is improved by four conditions: a severe winter that freezes the roots, snow cover that keeps the roots cold in the spring, extreme variations in temperatures from day to night,  and good exposure to the sun."** 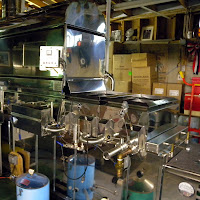 Mr. Messer talked about his new reverse osmosis machine which removes a great deal of the water from the sap before the boiling thus considerably reducing the fuel needed in the boiling/evaporation process.*** He also showed us Sunday Mountain Maple Farm's state of the art plastic spiles and piping which eliminate hand gathering since sap flows into central tanks. The shiny stainless evaporator (photo at left) contrasts sharply with the open evaporator in the Weston Sugar House (photos above).  For more details on the history and the making maple syrup, check out: NH Maple Producers. 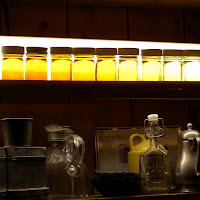 According to Mr. Messer, all of the grades of his syrup contain the same amount of sugar (67%) but the earliest runs result in the lightest and more delicate tasting syrup. As the season progresses the syrup produced becomes darker and the flavor more full-bodied. According to Harold McGee writing in On Food and Cooking , "The sap contains about 3% sucrose at the beginning of the season, half that at the end; so late-season sap must be boiled longer and is therefore darker and stronger-flavored."  McGee continues, "The final composition of maple syrup is approximately 62% sucrose, 34% water, 3% glucose and fructose, and .05% malic and other acids and traces of amino acids. The characteristic flavor of the syrup includes sweetness from the sugars, a slight tartness from the acids, and a range of aroma notes, including vanilla from vanillin (a common wood by-product) and various products of sugar carmelization and browning reactions between the sugars and amino acids. The longer and hotter the syrup is boiled, the darker the color and heavier the flavor."**** The light amber is excellent for custards and on ice cream, all are great on waffles and pancakes and the dark amber and Grade B are good for cooking. 12 bottles (partial photo left, starting with darkest) display Sunday Mountain's 2012 range, smaller than usual given the short season.


Sugar on Snow
Heat maple syrup to about 234 degrees F.  A higher heat will make a stiffer product. As soon as the syrup reaches the proper temperature, immediately pour or drizzle  over clean packed snow (this also works over shaved ice pressed on a cookie sheet). Because it cools so rapidly, the supersaturated solution does not have a chance to crystallize. It will form a thin glassy, chewy, taffy-like sheet over the snow. Traditionally it's served with large sour dill pickles to cut the sweetness, and plain doughnuts.


Storing Maple Syrup
After opening, I used to store maple syrup in the refrigerator but have recently learned that the best way to store it is in the freezer. During my recent visit to Sunday Mountain Maple Farm, Mr. Messer removed a glass jar full of maple syrup from his freezer and showed me how easily it would pour.  Of course, it would be much too cold for many uses.  Plan ahead, remove the desired amount before hand then further warm if necessary.

The Indians took advantage of the fact that sugar does not freeze to actually make sugar.  In On Food and Cooking, Harold McGee relates a story from the Remarkable Occurrences in the Life and Travels of Col. James Smith (published 1799):

"We had no large kettles with us this year, and the squaws made the frost, in some measure, supply the place of fire, in making sugar.  Their large bark vessels for holding the stock-water, they made broad and shallow; and as the weather is very cold here, it frequently freezes at night in the sugar time; and the ice they break and cast out of the vessels.  I asked them if they were not throwing away the sugar? they said no; it was water they were casting away, sugar did not freeze and there was scarcely any in that ice.... I observed that after several times freezing, the water that remained in the vessel, changed its color and became brown and sweet."*****

So where does all my maple syrup go?  Most recent to old favorite recipes include:

*  While sap can be boiled in a large pan on a residential stove, larger operations use an evaporator to boil the water out of the sap. The evaporators I grew up were relatively simple, though designed to try to maximize the heated surface area in contact with the sap. From Wikipedia: "The first evaporator, used to heat and concentrate sap, was patented in 1858. In 1872, an evaporator was developed that featured two pans and a metal arch or firebox, which greatly decreased boiling time.Around 1900, producers bent the tin that formed the bottom of a pan into a series of flues, which increased the heated surface area of the pan and again decreased boiling time. Some producers also added a finishing pan, a separate batch evaporator, as a final stage in the evaporation process."

*** "Today, many producers use energy-efficient reverses osmosis devices to remove about 75% of the sap water without heat." On Food and Cooking, page 669

Posted by cookscache at 2:23 PM No comments: 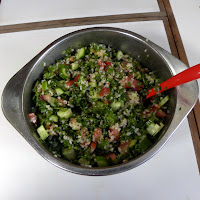 Chris came sailing with us last weekend and to my pre-weekend query of, "What should I not forget to have on board? He replied, "Sunchips and/or dark russet chips. Stuff for tabouli. Oh, also omelettes/boat toast/pancakes, of course but that was obvious." Umm.  I have to admit tabouli has been a "locker staple" on the boat. "Locker staple" meaning I stow a few of the packages of the Fantastic World Foods Tabouli Salad (mostly bulgar plus some dried spices).  If I can scrounge up a couple of vine ripe tomatoes and a cuke along the coast, we have a lunch or dinner salad.  But since this was a real request I decided I'd better make the real thing. After consulting a few recipes I decided on my own version.  Even Chris had no suggestions for improvement.

Cover and soak until bulgar is tender.

When the water has been absorbed (~ 30 minutes) or longer add:

If refrigerated after mixed, remove ~half an hour before serving.

This is good served alone or added to pocket bread which has been sliced in half and spread with hummus.

Posted by cookscache at 7:52 PM No comments: