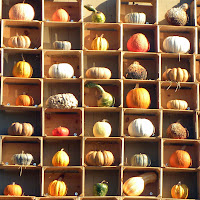 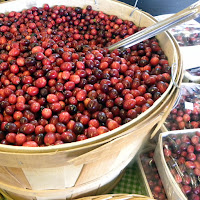 It's also the beginning of the holiday season and time to make Roasted Almonds, Cranberry Ice, Cranberry Relish, and Creamed Onions, also Cranberry Bread for holiday breakfasts and Pumpkin Pie and Apple Tart for Thanksgiving desserts.  Though Ed's family always served Hot Potato Salad for both Thanksgiving and Christmas, we tend to save it for Christmas and/or New Year's and have whipped potatoes or Mashed Potatoes with Parsnips for Thanksgiving. 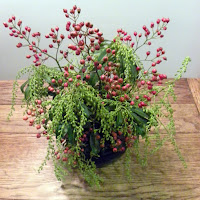 As the holidays approach I aggressively "prune" our Andromeda and add rose hips for color as a centerpiece for our table. 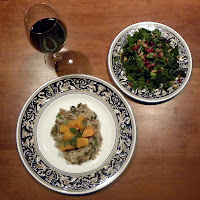 For a cozy dinner by the fire, we take advantage of the many varieties of mushrooms now available and have Mushroom Risotto with Winter Squash and Sage accompanied by a salad of Bitter Greens with Mustard Maple Dressing.

Email ThisBlogThis!Share to TwitterShare to FacebookShare to Pinterest
Labels: holiday, in season 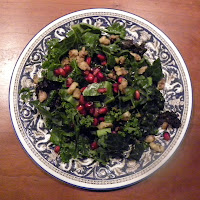 It's getting to be that time of year, not too much local stuff around.  Lots of squash and lots of kale. I've never used kale in salad before but tried it last night with a sweet dressing.  I really liked it, Ed declared it a bit "scratchy" and suggested I blend it with more conventional salad greens or use more spinach next time. Trick is to cut the greens into small strips.

Mix together in salad dressing carafe or glass jar: 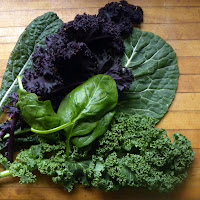 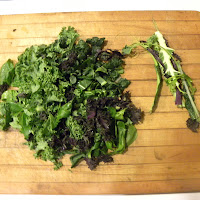 Kale (the more varieties the better), collard greens and spinach...

Toss with the Maple Mustard Dressings and top with: 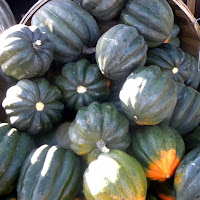 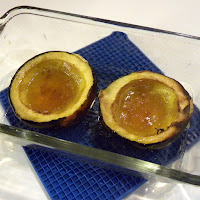 This is a fall favorite I remember my Mom making when I was growing up in New Hampshire. It is so easy to make and ideal to stick in the oven when roasting chicken or meat.

Cut squash in half and clean out all the strings and seeds.

Place squash in a baking pan with enough water to cover half way up each piece of squash.  Place in each squash:

Place in preheated oven and cook 45 minutes to one hour, depending on size of squash, until flesh is soft and easily pierced with a fork.

Oven temperature may be adjusted to accommodate another recipe cooking simultaneously; if temperature is higher and edges of squash begin to burn, cover with aluminum foil.  Add more water if necessary. 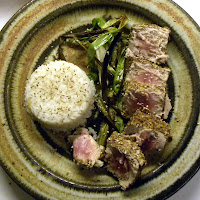 This recipe owes three big thank-yous to Alex and Dan: first, for giving me The Paley's Place Cookbook for Christmas last year; second, for suggesting we eat at the Moonstone Grill when Ed and I were recently in Trinidad Bay (CA) and third, recommending we order the tuna.  The tuna* was sesame crusted, seared rare and served with ginger sticky rice, fried leeks and a trio of sauces: Sriracha aiolo, chive oil and beet emulsion. Ed and I seldom order the same thing, but this time we did, a double good choice.  When I asked how the tuna was cooked I was told it was rolled in sesame seeds and then pan fried. However, for my first two tries I chose to try a technique found in the Paley's Place recipe for Poppy Seed-Crusted Albacore Tuna with Chickpea Puree and Fennel Salad: rolling the tuna in seeds, poppy in their recipe, sesame in mine, then wrapping it in aluminum foil. 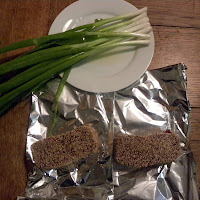 In a small skillet over medium high heat, toast until they are golden brown:

Stir constantly.  If the seeds start to pop, lift the pan off the heat and continue stirring until popping subsides.

If planning to use Ginger Sticky Rice make recipe below. 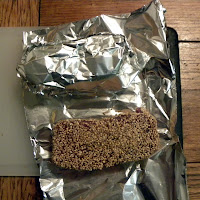 Roll the tuna pieces in the sesame seeds.  Do not use all the sesame seeds at once; there may be more than enough.  In this case, if they have not touched the tuna they can be saved for future use.

Tightly wrap the tuna pieces in one layer of aluminum foil.

Heat a large dry skillet over high heat (we do this on a skillet on the grill) until very hot, about 5 minutes.  Sear the tuna, still wrapped in foil on all sides, about 5 minutes altogether. Cook the scallions for approximately the same time, until wilted and tender. The tuna will cook fairly fast and keep cooking after being removed from heat. Unwrap each piece right after cooking to reduce speed at which it will continue to cook. To also reduce further cooking slice in 1/2 thick pieces. I serve with wasabi, wasabi butter and pickled sushi ginger. 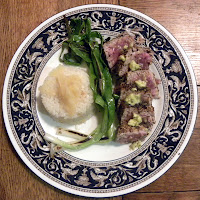 In a rice cooker or small pot with cover combine:

Cook until all water is absorbed; keep warm until tuna is ready to serve. I form rice in ramekins and then unmold on individual plates.

* If you go to the Moonstone Grill site and see Big Eye Tuna (not one of the more sustainable tunas) on the menu please be advised the menu is from when the Moonstone Grill opened in 2003. Chris Smith, the restaurant's owner told me that Moonstone no longer serves Big Eye but first grade tuna - the best that they can purchase that is safe catch.


This recipe is from The Paley's Place Cookbook


The conventional way of preserving lemons can be time consuming, I devised this quick and easy alternative.


With a paring knife, remove the peel from the lemon in large pieces, then cut it into julienne strips.  In a small saucepan, place the peel and enough cold water to cover and cook over high heat until water boils. Drain and repeat this process twice.


Juice the peeled lemon and strain into a small bowl; add salt and sugar, then the blanched peel.  Let the peel macerate at room temperature for 1 hour so the flavors marry. Store, refrigerated, in a tightly sealed plastic [I would use glass] container. It will keep for about a week." (page 219) 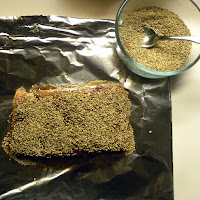 VARIATION:  This works with salmon too. Top some Salmon with Red Miso Sauce with roasted sesame seeds, wrap tightly in aluminum foil and grill approximately 5 minutes on a side until temperature reaches 125 degrees F. 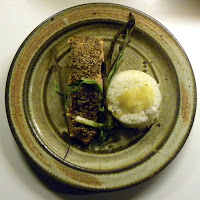