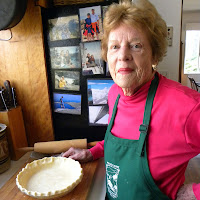 I have never been a pie person, but starting last year the Thanksgiving dessert responsibility has been delegated to me.  Last year I made an Apple Tart and a Pumpkin Pie and had planned to do the same this year (even had the pumpkin pureed and ready) when Kiki said she would really like a pecan pie. Although I think I liked Mom's pecan pies when I was younger (recipe below), pecan pies now remind me of corn syrup and runny over-sweet middles, not the best finish for a big Thanksgiving dinner.   But not wanting to disappoint. I consulted How to Cook Everything (original edition/1998) where Mark Bittman shares my sentiments: "There are two kinds of pecan pies, one of which contains not only sugar but corn syrup. I don't like this version - not only is it too sweet, if you taste corn syrup by itself you'll never cook with it again."*  Though I have never tasted it straight-up, I can imagine. Then after you've made the corn syrup laden dessert that was pretty awful, you have the almost full corn syrup bottle staring you in the face every time you open the pantry closet until you finally pour the syrup down the drain and recycle the bottle.  I liked Bittman's alternative, a custard pie that thickens the sugar with eggs.  Moogie and I made the pie using Bitmann's recipe but I reduced the vanilla from 1 T to 1 t. 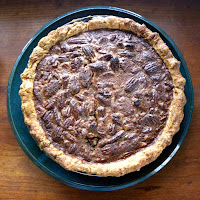 Prebake the Pie Crust.  While heating the oven for the pie crust, place

on a baking sheet and bake  (this can and should be done well before oven reaches 425 degrees F) shaking and stirring for about 5 minutes or until pecans are hot.  Cool the pecans. Select one cup of in tact whole pecan halves and coarsely chop the remaining nuts.

In a medium saucepan, beat until foamy:

Warm this mixture over medium-low heat, stirring occasionally, until it is hot to the touch. Do not boil, then stir in:

1 t vanilla extract and the pecans.

Pour this mixture into the still-hot pie crust and bake 30 - 40 minutes, until the filling shakes like Jell-O but is still quite moist.  Cool on a rack and serve warm or at room temperature.  Unsweetened whipped cream is an excellent accompaniment to offset the sweetness of the pie.

A WORD ABOUT CONVECTION OVENS:  I cooked this using the convection oven option at 375 degrees F.  The filling was too hard when I checked the pie after the minimum time, 30 minutes.  I am going to use the regular oven option next time.  Alternatively if you do use a convection oven use a lower heat.

1 c sugar gradually and cream together until light and fluffy.

Then add and blend well:

Pour mixture into pastry shell. Bake on lower shelf in moderate oven (350 degrees) 45 minutes or until a knife inserted into the filling comes out clean. 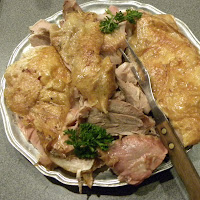 AND THE TURKEY
Jason did an awesome job of cooking the turkey (without stuffing - stuffing was baked and served on the side) on his Sykes grill.  It was greatly enjoyed by Moogie, Jason, Kiki, Christopher, Ed and me. Parker was at a ski camp in Colorado and Alex and Dan stayed in Portland and cooked their first Thanksgiving turkey. They got the turkey (from the Pine Mountain Buffalo Ranch in Bend OR) at the Portland Farmer's Market the Saturday before Thanksgiving. 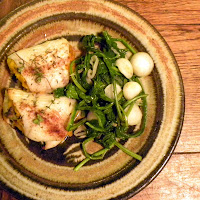 If necessity is the mother of invention, then necessity = available ingredients.  I had pureed pumpkin left over from Thanksgiving (the vote was for Pecan Pie and Apple Tart this year) and Ed was getting sick of Pumpkin Soup.  Hence a variation on Sole Florentine. 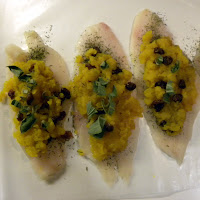 Divide mixture among the filets, spreading evenly over the top of each filet.

Roll the fillets and place them in a  lightly oiled baking dish..
Sprinkle ground nutmeg on the tops of the rolled filets.

Bake at 425 degrees F for 15 minutes (less time if pumpkin is warm to start) or until fish flakes.

I served this with fall crop Haiku Turnip Sautee dressed with a bit of tarragon vinegar - a good contrast to the sweetness of the pumpkin.

Posted by cookscache at 10:53 AM No comments: 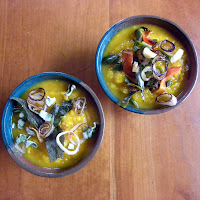 And the pumpkins.... One turned into pumpkin soup. Unlike the Pumpkin Soup recipe posted earlier on this blog, this soup contains no cream/milk.

Peel, seed, quarter and cut into one inch cubes:

While pumpkin is cooking, in a heavy stockpot sautee until onion is tender:

Puree the mixture in a food processor* until smooth, adding additional stock if necessary to get desired consistency. Either refrigerate/freeze for future use or return some or all of the soup to the pan and keep warm until served.

Shallots, thinly sliced and fried in olive oil until browned and 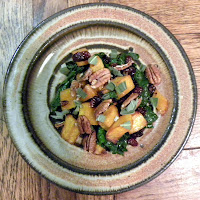 Taking advantage of the local fall crop, I bought a big bag of spinach. So now I had a lot of spinach and a lot of pumpkin.  I had seeded, peeled and cut one one of the pumpkins (about 5 pounds total) into quarters then wrapped the quarters tightly and stored them in the refrigerator for future use. Combining one of the quarters of pumpkin with some of the spinach, I made the following dish for dinner.

While oven is heating cut:

One quarter of a pumpkin (see above for prep) into 1 inch chunks, toss to coat lightly with:

Place in an oven proof dish.  Bake for 15 - 25 minutes, tossing every five minutes after the first ten minutes until the pumpkin is tender and browned.  When pumpkin is almost done, in a skillet or small wok sautee:

When the garlic is browned add:

Cook until spinach is barely wilted then divide between 2 plates.

Remove pumpkin from oven and add:

Toss well then divide mixture on top of the spinach.  Garnish with 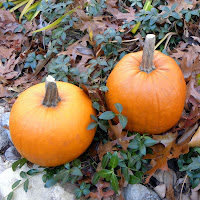 Expecting Alexandra and/or Christopher home at Halloween time and having had a hard time finding big enough pumpkins to carve last year, I got two sugar pumpkins in mid October. Christopher decided to stay in NYC for a Halloween party and Alex was too busy to carve, so I still had the pumpkins and no sentimental attachment to any Jack-o-Lanterns. Time for more pumpkin recipes:

Also time to return to: