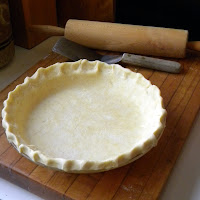 Blend 5-10 seconds in a food processor fitted with a steel blade: 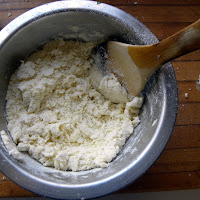 VARIATION:
When I checked out a Pecan Pie recipe in Mark Bitman's How to Cook Everything (original edition/1998) for Thanksgiving this year, I also noticed that his method for making pie crusts is different than the one I have been using.  I guess there are really 3 method options, (1) completely by hand, (2) completely by food processor, and (3) a combination of both, the one used by Bittman (see below). Either option 1 or 3 produces a much flakier crust than the method which entirely relies on the food processor. Having once tried option 3 it is now my preferred choice. 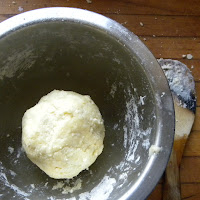 Bitman combines the flour (he uses 1 1/8 c/5 ounces), sugar (1 t rather than 1 T) and 1/2 t salt in the bowl of a food procesor and pulses once or twice he then adds the butter (1 stick) and blends until a cornmeal texture is achieved (about 10 seconds).  He then removes the mixture to a bowl and sprinkles 3 T of ice water over it. Using a wooden spoon or rubber spatula he stirs to gather mixture into a ball adding another 1/2 T of ice water if necessary, finally making a ball by hand. Wrapping in plastic, flattening into a small disc and freezing the dough for 10 minutes or refrigerating for 30 minutes will ease the rolling. 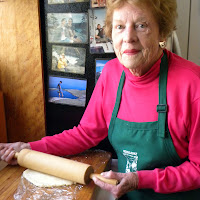 Dough can be refrigerated for a day or two or frozen for a much longer time.

On Bitman's recommendation, Moogie and I sprinkled flour on the dough then rolled it between two sheets of plastic wrap.  We rolled with light pressure from the inside out, occasionally removing the wrap and adding a bit more flour to keep the dough from sticking to the wrap.  Moogie then put the dough in the pie plate and crimped the edges.

For a PREBAKED FLAKY PIE CRUST

Using a fork, prick holes at one inch intervals in the bottom of the crust.
Cover entire crust with aluminum foil that has been buttered on the side to be placed against the crust. Weight the foil with pie weights, beans or a tight fitting pan.  Bake for 12 minutes.  Remove from the oven and reduce heat to 350 degrees F. Remove weights and foil being careful not to damage the crust.  Bake another 10 to 15 minutes until the crust is browned.  Remove from oven.  Fill warm shell or cool depending on individual pie recipe.

* June 2013: In the "Olive Oil Double Crust" recipe in Vegan Pie in the Sky the authors advise, "The secret is to place the olive oil in the freezer beforehand so that it becomes partially solid. This helps the fat blend into the dough in little pockets, creating the flakiness you crave." (page 39)  This reminded me based on experience (I once ditched a crust made with room temperature butter because I knew intuitively it would be tough) how butter should be cold.  This is corroborated by Harold McGee in his Keys to Good Cooking:

"Flaky crusts break apart in crisp flakes because the fat and flour are layered in separate thin sheets before the liquid wets the flour into a dough.
To make a flaky crust, cut chilled fat into small pea-sized pieces in the flour, by hand or in a mixer or processor, then add liquid, form the dough, and roll out once as a single mass." (page 405)

Posted by cookscache at 9:30 AM