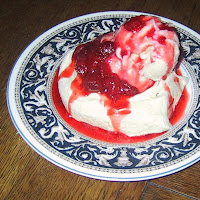 I've served meringue shells with vanilla non-fat frozen yogurt/vanilla ice cream and strawberries for Christmas Eve for many years. The recipe is adapted from the original The New York Times Cookbook  by Craig Claiborne. In recent years many family members have opted for Strawberry Shortcake instead (much less sugar!). For notes on preparing the strawberries see: Strawberry Shortcake. These shells are also good with chocolate frozen yogurt/ice cream and raspberries.

Beat the egg whites, cream of tartar and salt until frothy. Add the sugar gradually, while continuing to beat. Add the vanilla and continue beating until the mixture is glossy and stiff, but not dry.

Cover a baking sheet with waxed [I now use parchment] paper and drop mixture to form 6 equally spaced round mounds on the sheet; using a spoon, press down on the mound to form a "bowl" in the center, to later receive the ice cream, surrounded by higher peaks of meringue around the edges.

Bake in a very slow oven (250 degrees F.) until firm and dry but still white, about 60 minutes, or until shells sound hollow when tapped on the bottom. Remove the meringues from the paper while warm. Then return to warm (turned-off) oven for 30- 60 minutes. 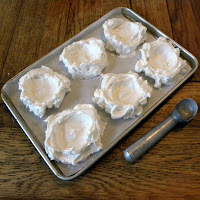 Having just made this recipe after a long hiatus, I would now argue that the recipe as written makes 8 very generous shells.  I made the "smaller shells" (3 egg whites and 3/4 c sugar) and found the resulting 6 shells still very large (photo at left). Forgetting they do increase in size while cooking, I made the mistake of placing them too close together on the baking sheet. 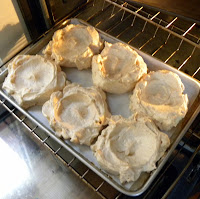