Chicken thighs were on special. Awesome focaccia bought on impulse. When I got home the grilled terriayki/sate chicken I had planned just didn't seem to go with the focaccia. I didn't have the olives for Chicken Marbella and it was a good night to grill. Ergo: 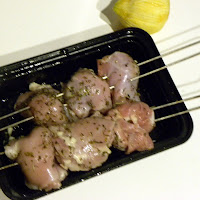 In a shallow dish, just large enough to hold the meat in one layer, mix

Place in the marinade and mix well to coat all sides:

Before or while chicken is cooking, in a small saucepan combine: 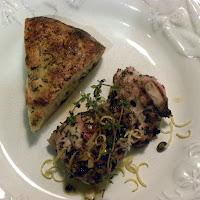 Cook over medium heat until liquid is reduced by at least one-half.

Thread chicken on skewers (optional) and grill over medium heat for about 12 minutes, depending on hotness of fire and size of thighs. Turning and basting with the marinade every three minutes.

Serve topped with sauce and:

zest of one half lemon
fresh thyme (optional)

Posted by cookscache at 5:39 AM No comments: 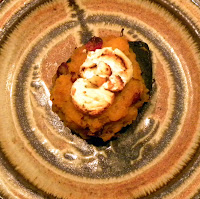 Another successful attempt using some of our 2009 Jack-o-Lanterns.

With a mixture of:

Place stuffed peppers on a non-stick surface and bake at 400 degrees 10-20 minutes (longer if chilies and stuffing are at room temperature to start, shorter if the filling is still warm). About 5 minutes before the peppers are done, on top of each place:

Continue cooking until the cheese is soft and slightly browned.

Posted by cookscache at 1:08 PM No comments: 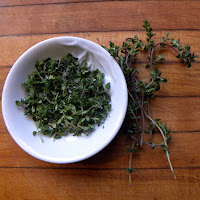 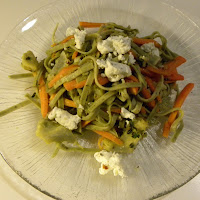 Fresh herbs really make a difference. But until I expand my indoor herb garden (this year!) or find a vendor that sells herbs loose, I am stuck buying herbs in packages that contain enough herbs for several recipes. Yesterday flounder was on special and the first spinach of the season has just made an appearance; I wanted fresh thyme for Sole Florentine... how else to use the rest of the package (other than drying it/or freezing it)? Stuffed Portobello Mushrooms are best with fresh thyme (and also use spinach) and fresh thyme would be a great addition to Chicken Breasts Stuffed with Spinach, Mushrooms and Goat Cheese. So I did these recipes this week and still had thyme left as well as two fresh artichoke hearts.

We miss Alex in many ways; one is when eating artichokes. She is a huge artichoke heart fan and an artichoke heart is most appreciated and quickly disappears when she is around. Ed and I enjoy the leaves of a steamed artichoke but slow down as we reach the heart. Looking at two huge hearts in the refrigerator, I decided to make Pasta with Artichokes and Carrots, photo at left, using fresh rather than canned artichoke hearts. An awesome improvement; will definitely go this route again. This recipe also calls for fresh or dried thyme. Since I had fresh on hand I used this too, a second plus.

Posted by cookscache at 3:21 AM No comments: 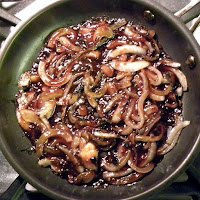 Make marinade by mixing together:

Turn pork to be sure all surfaces are well coated with the marinade. Place in refrigerator for 1-2 hours; remove from refrigerator one-half hour before cooking.

Before or while cooking pork make Onion Sauce:

Grill or roast pork until done (150 degrees F), basting with any remaining marinade; time will vary given hotness of grill; medium temperature for ~ 20 minutes for a tenderloin. NOTE: If using a tenderloin it is best to let it sit for about 10 minutes before slicing, temperature should rise about 5 degrees in this time so set meat thermometer accordingly. 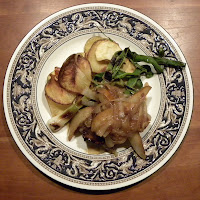 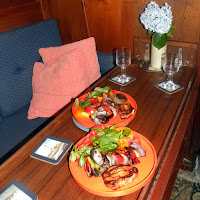 VARIATION:
Use just the marinade without the additional sauce:

* Goal is to make my own fig sauce, but until I do, I use this which is available at many markets both in the East and the West.

Posted by cookscache at 11:36 AM No comments: