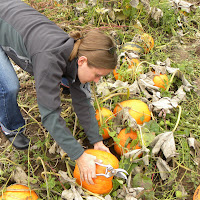 Halloween started for us in early October when we went with Alex to the CSA Farm outside of Portland that Alex and Dan have contracted with for weekly vegetable (and sometimes flower) deliveries. The occasion was an Open House, or farm as it were, to see the fields and harvest a pumpkin. We watched while Alex chose a pumpkin and had a chance to visit with the husband and wife who run the farm as well as a few of their children. Alex said that while she and Dan would probably carve the pumpkin for Halloween, they planned to use battery "candles" so she could subsequently use the pumpkin to make pies. 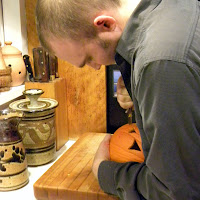 When Alexandra and Christopher were growing up, Jack-o-Lanterns were a big deal. Carefully selected days ahead of time in order to get the "perfect ones", and carved with care and imagination. One year we had a particularly large one with a strobe light, instead of a candle inside. After Alex and Chris went their separate ways, Ed and I dismissed the Halloween Jack-o-Lantern, settling for the strobe light in the bushes and a couple plastic bats stuck near the entrance where the few trick-or-treaters we attracted knocked. We did finally start buying candy after Dan told us our idea of offering apples, pretzels (they were in the shape of Jack-o-Lanterns and in Halloween wrapping) and pencils (they did have a Halloween decoration) reminded him of the dentist on his street in Michigan that handed out toothbrushes for Halloween. In all fairness we usually included some stickers or black spider rings. At Christopher's suggestion, next year we are going to offer light sticks.


This Halloween, Christopher was unexpectedly at home. The afternoon of the 31st, I got the idea it would be fun to do Jack-o-Lanterns and Christopher agreed. Easier said than done. I quickly found that the farms where we used to get pumpkins were either now out of business or out of pumpkins, except for very small ones. I finally found two large sugar pumpkins (small by Jack-o-Lantern standards, but sweet for cooking), the biggest pumpkins apparently available at this late date and took them home. None too soon. Christopher designed the faces, a "happy" and an "angry" Jack-o-Lantern and carefully carved the features with the surfaces slanting back into the interior of the pumpkin. Christopher got one Jack-o-Lantern finished and outside on our deck and was working on the second when our first trick-or-treaters arrived. 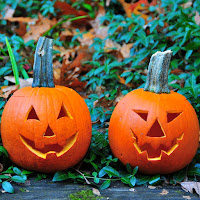 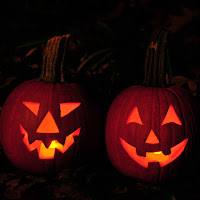 After he had finished both Jack-o-Lanterns and they were both glowing with the battery powered "candles" I had purchased along with the pumpkins, Christopher reminisced on Halloweens past. "What I really remember", he said, "is how you used to leave the old Jack-o-Lanterns in the garden by the terrace and how they would sit there and rot. It was really disgusting." Motivated by my recent resolutions to eat as locally as we could and a desire not to leave any more disgusting memories, I resolved we would eat all of the pumpkin. I had already saved the seeds to roast and the cut out parts for pie, and the battery powered "candles" would not blacken the pumpkin interior. 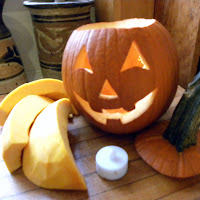 At any rate we enjoyed the Jack-o-Lanterns for three or four nights (they spent the day wrapped in plastic wrap in the refrigerator); then Christopher commented, "Mom, are you going to let these pumpkins rot just like the others?" So next morning, I peeled and cut up the pumpkins into slices or into chunks which I cooked and pureed to use in pies. I was feeling pretty good about this, until Christopher came down for breakfast and said, "Mom you cut up the pumpkins!". Then it hit me. I, I who saved everything Alexandra and Christopher had ever made (well, not dinners) or written, after many photographs and making a template of the faces, I cut up the pumpkins Christopher had carved. Seeing my reaction, Christopher began to unmercifully pull my chain. First, I discovered Christopher really didn't like pumpkin which didn't help me feel any better about hacking up the Jack-o-Lanterns. Then every pumpkin recipe I served would be met by Christopher saying, "Is this the happy or the angry pumpkin?" Of course, after Christopher greeted the Thanksgiving pie with this comment, I had to retell the story for all present

Anyway I did discover some new pumpkin recipes which I've also posted. Even Christopher declared the muffins a success.

Posted by cookscache at 7:44 AM