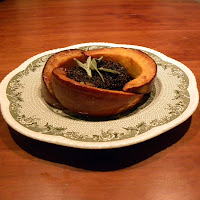 This is another recipe I discovered while trying to make the most use of our 2009 Jack-o-Lanterns. It is adapted from Mark Bittman's How to Cook Everything (original edition/1998). I have only made it once and it turned out to be pretty much of a disaster because although the tops looked wonderful the bottom of each slice was badly charred. The unburned part was very tasty and I am going to try again* having learned the lesson: Turn Often!

Unless this is the remains of a Jack-o-Lantern, remove seeds and strings, reserve seeds for Firey Pumpkin Seeds and spread slices on a lightly oiled baking sheet.

Brush a bit of this mixture onto the pumpkin. Bake for about 25 minutes, then brush again. Turn slices and brush tops. Bake until done, an additional 20-30 minutes. Turn and check every 10 minutes to be sure bottom surface is not charring; when checking and turning brush with any remaining mixture. 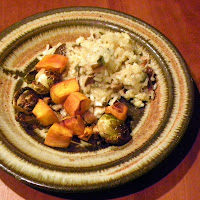 * November 2012:  Maple Baked Pumpkin Revisited the above recipe, this time reading Bittman's recipe more closely. Bittman's recipe does not give instructions to peel the pumpkin though I recall I did (instructions above to the contrary). I made it again, not peeling the pumpkin and served with some quinoa left over from Carnival Squash Stuffed with Black Quinoa Pilaf (photo at top).  OK at best.  I did not like the soy sauce overtones. Took the last quarter of a pumpkin I had left, peeled it,  cut it in chunks, tossed it with

Baked on a lightly oiled cookie sheet at 450 degrees F, about 20 minutes until the pumpkin was soft. Although the outer leaves of the Brussels sprouts charred slightly they were very tasty and the pumpkin with this simpler sauce much better to my taste than the "Baked Pumpkin Slices". Photo above shows this mix served with Mushroom Risotto (version with sage).

** January 2015:  We are having a brussels sprouts revival. I never much liked brussels sprouts, perhaps because I usually steamed and overcooked the veggie.  This past holiday season I made Warm Brussels Sprouts Salad  many times and Alex and Dan roasted brussel sprouts a few times.  In all cases the sprouts were still a little crunchy. Based on Alex and Dan's cook time I would now add the brussels sprouts about 10 minutes after the pumpkin.