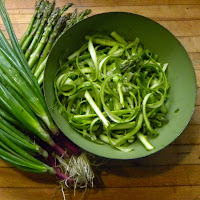 No recipe posts in quite a while. Am I less adventurous or having more failures in the kitchen? Maybe a little of both.  This recipe turned out to be a resounding success on the first try --- only wish I had had it for last year's asparagus season too!  A couple of Christmases ago Chris gave me the Smitten Kitchen Cookbook. I immediately read it and flagged several recipes to try.  One that missed my eye the first time, maybe because of the pizza part, was "Shaved Asparagus Pizza". On re-reading I discovered the origin of the pizza. Deb Perelman writes, "I was at a restaurant that served it [asparagus] shaved raw into ribbons, dressed only with lemon, olive oil and Parmesan"*. Wow, I thought, we are in the height of asparagus season, forget about the pizza, go for the salad.  Using Perelman's pizza recipe (no lemon juice), it was easy to come up with a salad recipe.  I had a critical tester who I think this time of year begins to hope the asparagus season will soon be over.  After tasting this salad, he offered no suggestions except to make it again soon.   It is as pretty as it is tasty, especially when made with asparagus that is picked the same day.

When I boil/steam asparagus I like the pieces with small diameters.  However, the bunches usually have spears of mixed diameters.  Slightly larger diameters work best with this recipe. 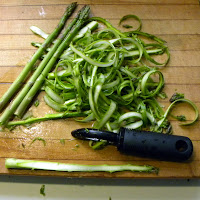 1/2 pound (about 16 medium size spears) asparagus; do not remove the tough end of the stalk.

Place each spear, on the edge of a cutting board, hold it by the tough end and and using a vegetable peeler, slice into thin strips. The last piece will be thicker than the others which will be "ribbon like". Cut the thicker piece into bite-size pieces. Save the tough end of the stalk to make Asparagus Stock. 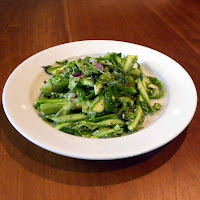 Put the asparagus in a bowl and add: 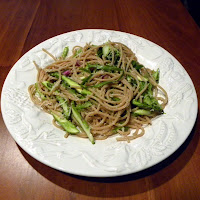 VARIATION: Make the salad, increase the olive oil to 2 T and toss with 6 ounces cooked whole wheat spaghetti (to serve two).  So sorry I just discovered this combination as the asparagus season ended....

Posted by cookscache at 2:49 PM No comments:

Email ThisBlogThis!Share to TwitterShare to FacebookShare to Pinterest
Labels: in season, salads 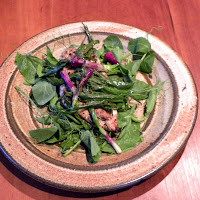 In my trip to the farm stand last night, I found pea tendrils and scallions. I already had some chicken breasts in the fridge. Ed grilled the chicken and the scallions (recipe at bottom of post) and I prepared the pea tendrils by removing the toughest stems and divided the tendrils between two plates. Topped with a chicken breast and grilled scallions this was an easy, pretty dinner for a hot night! 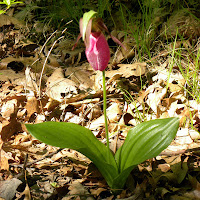 This blog is more than recipes... what's in season... our family in the kitchen...what's growing in our yard. This post falls in the latter category. When we first moved to Lincoln, we had a few lady's slippers on our property and our neighbor's woods had over two dozen.  Over the thirty years we have lived here, largely due to being eaten by deer, most of these rare orchids have disappeared. In April of 2003 our woods was severely burned by a forest fire and all the ground cover as well as mid-canopy was destroyed.  Before the fire, we had about four lady's slippers growing under a large birch which miraculously survived the fire. In subsequent years these four returned.  This year, however, in the location where four had been, I found nine, and in another part of our woods I found an additional lady slipper! Considering that lady's slippers do not reproduce easily and have been disappearing in many locations around us, this is a special surprise.