New things at the farm stand this month include ramps (late April/early May), bitter greens for stir fry, and pea tendrils. 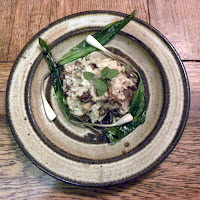 I've walked by the basket of ramps, sometimes called wild onions or wild leeks, at our local farm stand for several springs, deterred by their price per pound and the fact I'd never had them.  Finally this year I decided to buy a few to use as a garnish instead of scallions.  6 ramps turned out to cost less than a bunch of scallions. I lightly coated them in olive oil, then Ed put them on the grill for just a minute being careful not to burn them.  The were very tasty -  a cross between onion and garlic. They made a wonderful garnish to Mushroom Risotto as well as grilled fish and chicken. 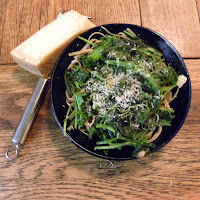 Bitter greens for stir fry, a combination of mustard and turnip greens and brocilli rabe are a new farmstand offering this year.  For a quick dinner, I sautee them in garlic and olive oil and serve over pasta topped with Parmesan cheese. When I told Powen, the farmer who suggested I try them that I liked them, he replied that I would like the just-arrived pea tendrils even better. 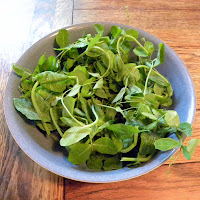 He was right! The pea tendrils are indeed my favorite of the group. They can be eaten raw in spring salads, sauteed in olive oil and lemon juice, Powen's favorite, or used in stir-frys.  As with other greens, any tough stems should be removed before cooking/serving.  I've read that pea tendrils should be stored in a plastic bag in the refrigerator and eaten within a day or two before they wilt and loose some of their wonderful delicate pea flavor. Maybe the reason I find them so tasty is I buy them fresh from the local farm stand and eat them soon after. 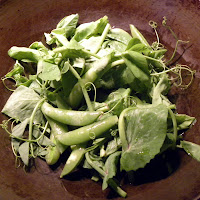 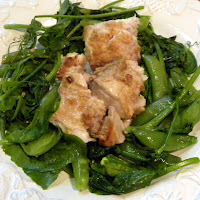 Ed and I like pea tendrils (sometime accompanied by snap peas) sauteed in sesame seed oil as a base for Lime Ginger Mahi-mahi. 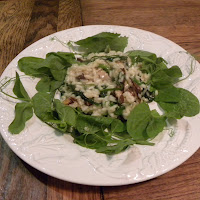 Pea tendrils are also excellent mixed in and as a base for Mushroom Risotto.

Prepare the pea tendrils per the directions above and the risotto per Mushroom Risotto with Pea Tendrils variation.  Just before serving the risotto add a handful (to taste) of pea tendrils and stir just until the tendrils have wilted.  Serve the risotto on a base of raw pea tendrils or pea tendrils that have been lightly sauteed in olive oil.

Posted by cookscache at 3:33 PM

Email ThisBlogThis!Share to TwitterShare to FacebookShare to Pinterest
Labels: grains, in season, veggies