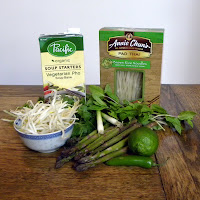 This time of year I'm always looking for interesting ways to cook asparagus and  Vegetarian Pho with Asparagus and Noodles  in April 23rd's New York Times caught my eye.  I liked the concept, but the recipe for the Simple Vegetarian Pho Broth which was a requisite ingredient did not seem so simple. Then I remembered seeing a "new product" recently at Whole Foods, Pacific Vegetarian Pho Soup Base (also available in chicken and beef). I bought the pho and a box of Annie Chun's brown rice noodles plus the veggies to make an easy version of this recipe:

The NYT recipe is for 6,  I made it for 2, scale accordingly.

Put water for the noodles in a large saucepan on the stove to heat and prepare the veggies: 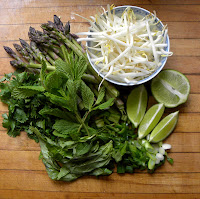 
In a small sauce pan heat

While the pho is heating, cook according to package instructions (~4-5 minutes)

While the noodles are cooking  blanch the asparagus for 2-3 minutes, just until crisp-tender. Drain and set aside. 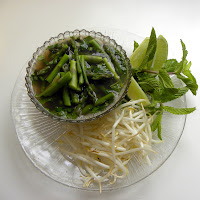 I think the purchased pho which uses a mushroom base is quite tasty, but you can always make your own  :-)