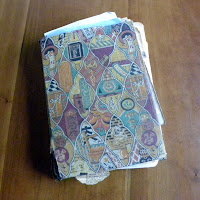 I'm working on a post that cites my Grandmother's Cookbook and thought this might be a good time to put it in context as several other recipes on this blog come from this source.  My grandmother, Hope Dorchester, was born in Providence, Rhode Island in 1887. She was 9 years old when Fannie Merritt Farmer's The Boston Cooking School Cook Book was first published. She met my grandfather, Alfred Densmore, while he was a student at Brown University, married him and moved to Lebanon, NH in 1909.

Most of her recipes are written in ink in a consistent script. A few recipes are in pencil in a different script, perhaps added at a later time, perhaps by others.  There are also recipe clippings from papers and magazines of the time. The cookbook is divided into tabbed sections:

Cakes: quite an extensive group of recipes including "Tomato Soup Cake", a spice cake, the ingredients of which include "a can of Campbell's tomato soup".

Ice Cream (and Sherbets): also quite a large collection of recipes. In the early twentieth century ice cream was generally sold at the Ice Cream Parlor or Soda Fountain - often found in small town "drug stores", but it did not become readily available in markets until the second half of the century when cheaper refrigeration became available. This section  includes a recipe for Cranberry Ice, though different from my post as it contains slightly different ratios of ingredients, as well as "4 egg whites, beaten" and no lemon juice.  The recipe for "Cranberry Sherbert (Martha)" is identical to my post for Cranberry Ice.  This is the last entry in this section and though the ink is similar to other entries it looks to be in my mother's (Martha) handwriting.  Quite likely, since my mother arrived in NH in the fall of 1945 and Hope died in the winter of 1946.

Jellies: a small section with only 4 entries

Pickles (and Relishes): not many recipes, but includes a recipe for "Bread and Butter Pickles".  I remember having these delicious pickles at my grandfather's and would like to try making them sometime. "Sweet Pickled Watermelon" was ubiquitous on restaurant "relish trays" when I was a small girl.   I lost my taste for these pickles after our summer neighbor who had six small children made a batch with their nibbled rind remains.


Puddings: many recipes, including  "Indian Pudding - Mother" which must have come from Hope's mother, Mary E. Brown Dorchester, Date and Nut Pudding, and "Steamed Chocolate Pudding" which I remember as very good but have yet to make. It was cooked in a steamer containing individual cups about the size of egg-poaching cups.

Salads: 9 of the 11 salad recipes are "molded" and contain Jello or gelatin and food coloring and mostly cucumbers, carrotts, onions, celery, pineapple or apples.  Only 1 salad, "Vegetables for salad for 170", contains fresh greens (9 heads of chickery).  This section also includes a fair number of salad dressing recipes including "Salad Dressing" (2 small t salt, 2 small t mustard, 3 small t sugar, 4 small t flour, 1 egg, 1 c cream, juice of a lemon or 1/2 c vinegar - "good to mix with boughten dressing"). The idea of flour in a salad dressing seems a bit bizarre, though I did find a recipe in the The Boston Cooking School Cook Book, "Plain Cooked Dressing" which  included 2 T flour.

Sausage: 1 recipe, "Dimick (the maiden name of my great grandmother Densmore) Sausage - For 40 pounds of meat, part of which should be beef. 3oz. pepper / 5 oz. sage / 8 oz. salt / little ginger". No further instructions.

Veg(tables)
Meats:  These two tabs share the same page. There are only a few vegetable recipes, for potatoes and beets, perhaps because, except in the summer, vegetables came out of cans. There is a recipe for "Salmon Loaf", 3 recipe clippings for meat loaf, a  few clippings which give cooking times for various cuts of meat and a guide for broiling meat.  Perhaps, cooks of this era turned to The Boston School of Cooking Cookbook for directions for cooking meat and vegetables (photo left).  As I recently explored Ms. Farmer's cookbook for the first time, I decided this must have been my mother-in-law's source for cooking string beans. Directions read: "Beans, string 30 min - 1 hour" or until tender.  When Ed and I were first married, his mother Florence would start cooking the green beans  just before we sat down for a cocktail (so they cooked until they were grey-green and mushy). To her credit, she soon, following my  suggestion, cooked green beans for just a few minutes.

It is interesting that there is no section for "casseroles" and no pasta entries except for three loose recipe cards (1) "Spaghetti Supreme" (2) "Spaghetti West Texas"  and (3) "Corned Beef Dinner" (containing among other things macaroni, ground meat, condensed cream of chicken soup, and grated cheese).  The last two recipes do not appear to be in the same hand as the rest of the book and may have been added, perhaps by my mother, in the 1950s after my grandmother's death and when lighter weight metal and glassware made the one-dish casserole more popular.

Since my Grandmother died shortly before my first birthday, I do not remember her cooking - just her recipes as cooked by my grandfather's housekeeper, ironically named Mrs. Dessert or by my mother.

OCT 2012:  Some recipes are hard to translate.  While looking for a specific recipe yesterday  I came across a recipe for Apple, Quince and Cranberry Jelly.  This recipe calls for "1 qt. cranberries, quince - 25 cents worth, 1 doz. apples".