The evening was billed as:
"... a special lecture series discussing the basic science and history of your favorite recipes for cookies and brownies featuring Michael P. Brenner, Glover Professor of Applied Mathematics and current Radcliffe Fellow.

What makes recipes different from each other? Where did recipes come from? You will learn about the recipe tetrahedron as well as the science and history that underlie it."

And then asking what we thought constituted a "new dish".    Ummm....  I've thought about this a lot. If I take a recipe from a cookbook and change the quantity of one or two ingredients even slightly, is that a "new dish"?  The evening's focus being on cookies and brownies, Brennan noted that the earliest recipe for cookies in the United States was probably in The First American Cookbook (1796):

The ratio of butter was probably low because butter was scarce and expensive. 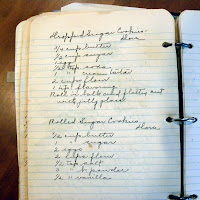 A sugar cookie recipe I found in the Sixth Edition of The Boston Cooking School Cookbook by Fannie Merritt Farmer (first edition published 1896, sixth edition, 1936) is richer: more butter, eggs and cream as well as baking powder (a mid nineteenth century invention). This recipe (photo above, left) also offers several "variations". My Grandmother's Cookbook (photo at left)  contains 3 sugar cookie recipes, one quite similar to The Boston Cooking School Cookbook, one quite different.  "New Dishes" or variations? (The third recipe must be a mistake as it contains sugar, shortening, an egg and milk but no flour.) 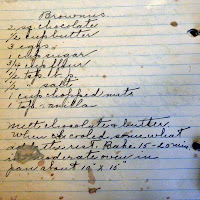 An arguably "new dish" is the brownie.  According to Brenner's lecture, the first published recipe for a "brownie" (Fannie Merritt Farmer's of The Boston Cooking School) appeared in the 1896 edition of the Ladies Home Journal.  The recipe contained no chocolate, and a little more flour than sugar [1/3 c butter, 1/3 c powdered sugar, 1/3 c molasses, 1 egg, 7/8 c flour, 1 c pecans ].  In 1905 the Boston Globe carried a recipe for "Bangor Brownies".  This brownie contained chocolate and 2 times as much sugar as flour [1/2 c butter, 2 eggs, 1 c sugar, 2 squares chocolate, 1/2 c walnuts, 1/2 c flour]. The brownie recipe has been evolving ever since. My grandmother's recipe (at left), containing a higher ratio of flour to sugar (but still more sugar than flour) and  the addition of baking powder, is probably more cake-like than "Bangor Brownies".

The Joy of Cooking states: "Brownies may vary greatly in richness and contain anywhere from 1 1/2 cups of butter and 5 ounces of chocolate to 2 tablespoons of butter and 2 ounces of chocolate for every cup of flour.  If you want them chewy and moist, use a 9 x 13-inch pan, if cakey, use a 9 x 9 inch pan [for a 2c sugar : 1 cup flour recipe].**  Mark Bittman in How to Cook Everything writes: "Brownie and bar doughs are virtually identical to cookie dough (in fact you can take any drop cookie dough and bake it in brownie form). The major difference is that brownies and bars never become crisp (unless of course, you overcook them mightily).  If you like very soft brownies, remove them from the oven when the center first sets; a toothpick inserted into the middle will still bring a few crumbs out with it, although it will not actually be wet."***  While the lecture focused on ingredients, technique can also make a difference in the final product. When I checked out brownie recipes in my current favorite cookbooks I generally found a sugar : flour ratio of 2:1. The major exception being an incredibly rich recipe in The Silver Palate Cookbook.**** Though introduced as "Traditional American Brownies - what could be better?" This recipe is relatively heavy on butter and eggs and has a sugar to flour ratio of 1:0.25. 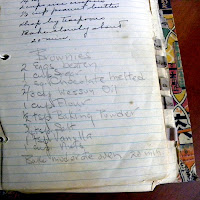 My Grandmother appears to have added (different hand style from most other recipes) another brownie recipe which calls for Wesson [vegetable] oil instead of butter and a sugar to flour ratio of 1:1. I suspect this recipe was added during World War 2 when butter and sugar were rationed.  On occasion, recipes are adapted due to ingredient availability and sometimes to make them healthier (Orange Poppy Seed Olive Oil Cake with 3 T olive oil to 1 cup flour vs Orange Poppy Seed Bundt Cake with 4 T butter to 1 cup flour).  In some cases ratios change, in others they remain constant.

How does one sort out all of these recipe variations?  Enter the Recipe Tetrahedron, the discussion of which comprised the bulk of the lecture.  The tetrahedron depicts 4 ingredient dimensions: flour (F), sugar (S), egg (E), and liquid (L) Over 1,000 recipes from http://allrecipes.com/ were placed in a data base and analyzed to determine ratios of these 4 key ingredients. The recipes were from 8 groups including brownies and sugar cookies and each group given a different color (see key at left). Each recipe was then mapped as a point on each face of the tetrahedron with each "face" showing the ratio of three of four main ingredients.

Loaves clustered near the flour vertex (some bread having no ingredients other than flour, water and yeast), moving toward the sugar vertex one finds a "cloud" of cookie recipes, then even more toward sugar a "cloud" of brownie recipes.  While some define brownies by the pan they are cooked in, Brenner proposes that it is the high sugar to flour ratio that defines brownies. Finally, the pancakes and crepes cluster in clouds with a higher ratio of eggs and liquids.  While many of a similar type recipe are clustered and can can contained in a "cloud", there are outliers in every category. The Boston Globe article about the Recipe Tetrahedron observes "Recipes are varied, tested, and refined over the years, and the most beloved succeed in large part because they've hit on the right ratios."  The Recipe Tetrahedron is all about ratios.

As part of the program, we sampled cookies that the students had made using different ratios of ingredients.  The ones high in sugar were obviously sweeter but had a fragile, crumbly structure, the ones with a higher flour ratio, not as sweet and with a harder denser texture, and the ones with a higher egg ratio, limper and wetter - almost like a crepe.  Ratios do make a difference, and the results will be further from "traditional" as one pushes the boundaries of or leaves the "cloud".

For some of the "science" covered in the lecture see the "Cookie Ingredients and Textures" section of Harold McGee's On Food and Cooking.  The preface to this section states: "Most cookies [McGee includes drop, cut-out, hand-shaped, bar (as in brownie) and icebox cookies] are both sweet and rich, with substantial proportions of sugar and fat. They're also tender, thanks to ingredients, proportions, and mixing techniques that minimize the formation of a gluten network. But they may be moist or dry, crumbly or flaky or crisp or chewey.  The diversity of textures arises from a handful of ingredients, and from the proportions and methods of cooking them."***** A concise description of the role of flour, sugar, eggs, fat and leavening in producing a cookie then follows.

Although only major  ingredients are reflected on the tetrahedron, the data base compiled for this study contains 60 separate ingredients for brownies alone. And broccoli was not included.  Yes, there are recipes on line for "Broccoli Brownies" but given their lower sugar ratio and other ingredients they would fall more in the cake "cloud". A "new dish"?

So what did this all teach me?   Well... one can probably change the proportions of one or more ingredients or add or subtract ingredients and own the recipe. Since changing the proportions changes the results, particularly in the type of recipes discussed on this post, the recipe/brownie I prefer may not be your favorite version.  Consequently, when I post a recipe derived from another recipe, I will continue to note changes I have made. While I prefer my adjustments you may prefer the original.