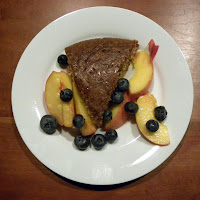 Orange Poppy Seed Bundt Cake is one of my favorites. Interestingly it has never achieved "Birthday Cake Status" in our household but everybody loves it.  I was recently thinking a slice of this cake would be a yummy accompaniment to the fresh peaches now in season.   Then I thought of the stick of butter the recipe calls for :-(  But then I though of my recent success with Chipotle Chocolate - Olive Oil Cake :-) The following recipe draws from these two recipes plus some technique commentary from On Food and Cooking.*


Line a 9 inch form pan with a piece of wax or parchment paper buttered on both sides. Preheat the oven to 350 degrees F.

Combine and mix well with an electric hand or stand mixer:

When well mixed, gradually beat in:

Then add together and mix: 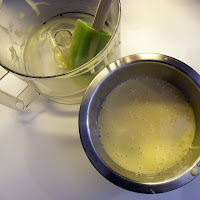 Finally, mix in by hand:

Before adding the poppy seeds, I often transfer the batter from the blender into the bowl in which I weighed the dry ingredients.  This makes it much easier to capture the most poppy seeds. 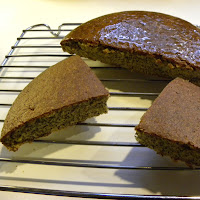 Pour the batter into the prepared pan and bake at 350 degrees F for 30 to 35 minutes or until a small skewer or broom straw comes out clean when inserted into the center of the cake.  The resultant cake is quite dense with a crisp crust quite similar to the Orange Poppy Seed Bundt Cake. I am working to lighten it a bit*** but notice many olive oil cakes are described as "dense" and some recipes use the technique of adding stiffly beaten egg whites (which would defeat my zero cholesterol goal) to lighten the cake.  I like it with the Orange Glaze (top piece in photo to right), but it is also good and less sweet without the glaze. 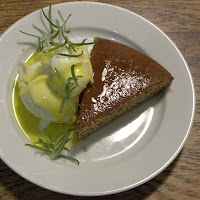 
When the cake has cooled, using a long toothpick or small metal skewer prick holes in it 1/2 inches apart and brush the following glaze evenly over the top and around the sides.


In a small sauce pan, combine:


Simmer gently for 3 to 5 minutes, stirring occasionally, until a light syrup forms. 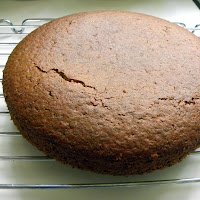 ** 21 August Revision:  The current recipe has less olive oil and more orange juice resulting in a lighter, less dense cake (photo at left) than the cake made with the previous recipe which called for 1/2 c olive oil and 1/2 c orange juice.