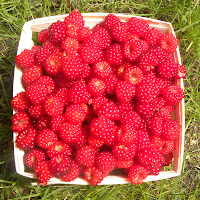 Time to check out the  woods!  For a number of years, (2009 berries at left, 2015 berries below), I have picked a sticky red raspeberry-like berry from the brambles on the west side of our house. Today after picking another heaping quart, I finally decided it would be a good idea to positively identify these wild things. Thank you Wikipedia: 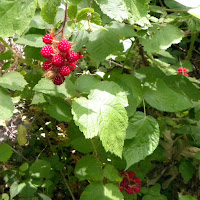 Wineberry "is a perennial plant which bears biennial stems ("canes") from the perennial root system. In its first year, a new stem ("primocane") grows vigorously to its full height of 1-3 m, unbranched, and bearing large pinnateleaves with three or five leaflets; normally it does not produce any flowers. In its second year, the stem ("florocane") does not grow taller, but produces several side shoots, which bear smaller leaves always with three leaflets; the leaves are white underneath. 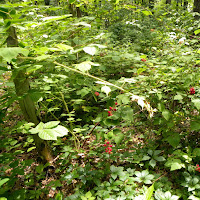 The flowers are produced in late spring on short, very bristly racemes on the tips of these side shoots, each flower 6–10 mm diameter with five purplish red to pink petals and a bristly calyx. The fruit is orange or red, about 1 cm diameter, edible ...it is not a berry at all, but an aggregate fruit of numerous drupelets around a central core. Ripening occurs from early summer.[3][4] . 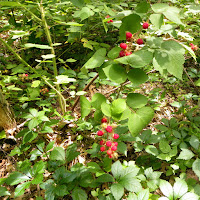 The canes have red glandular hairs. These red hairs give the species its scientific name from the Latin phoenicus meaning red .In addition to seed propagation, new plants are formed from the tips of existing canes touching the ground. They enjoy moist soil and grow near and within wooded areas.

As a fruit develops, it is surrounded by a protective calyx covered in hairs that exude tiny drops of sticky fluid...[7]"* 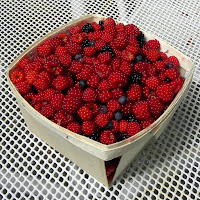 Biennial stems,  tips of the canes rooting in the ground, the protective calayx, the red sticky berries,  this plant, which is now boardering on invasive on our property, meets all the criteria of wineberry.

Over time many of the canes in our woods have died and turned brown. This spring  I  pruned the thicket and got rid of dead cane. This made the picking easier and, I think, the berries more abundant. 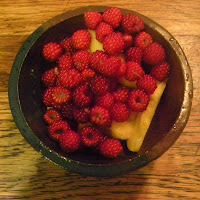 We will enjoy these wineberries, mixed with a few wild blueberries (more favored by the birds so less abundant) and wild blackberrries also found on the same wooded slope. Wineberries are also good as a topping for local peaches which are now in season too.

Posted by cookscache at 4:31 PM No comments: