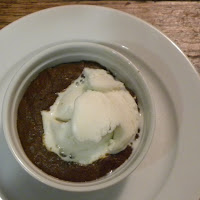 MY GRANDMOTHER HOPE'S VERSION
(Attributed to her Mother)

Cook well in double boiler. Put in baking dish with butter the size of a walnut. After baking one hour [in 350 degree F oven] add:

Technique adapted from (GE's) The Microwave Guide and Cookbook

In a 2 quart casserole, stir together

Microwave at High 5 minutes. Remove from microwave and gradually stir into milk mixture

Cover. Microwave at High 14 minutes, stirring every 2-3 minutes until smooth and thickened. IF a softer consistence is preferred, at this time add

Microwave at Medium 4 to 6 minutes more. Let stand about 10 minutes before serving.

This recipe (from the Durgin Park recipe brochure which I picked up when eating at this venerable Boston establishment several years ago) is included for historic reference only: "The fame of Durgin Park Indian pudding is world-wide. Long before Durgin, Park and Chandler took over the restaurant the pudding made according to this recipe was taken to sea by clipper ship captains who were restaurant patrons. It was made by chefs in ships’ galleys from Valparaiso to Hong Kong. The secret of its excellence lies in its slow and careful cooking." The Durgin Park version is way too sweet for my taste, and higher in cholesterol than other versions (more eggs and butter not to mention the suggestion of using lard). The prep time is problematic too.

Mix all the ingredients with one half (3/4 quart) of the hot milk and bake in a very hot oven until it boils. Then stir in the remaining milk and bake in a slow oven heat for five to seven hours. Bake in stone crock, well greased inside.