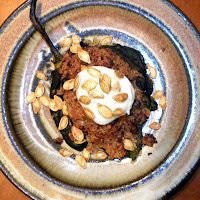 This recipe, inspired by Alexandra’s urging to cook more vegetarian meals (especially for Ed), is my own but takes ideas from two recipes, Hearty Grain-Filled Peppers (The Mayo Clinic Williams-Sonoma Cookbook)and Quinoa Stuffed Peppers (The Whole Foods Market Cookbook) and from dinner at Helmand (an excellent Afghanistan restaurant in Cambridge, MA).

In a large sauce pan bring the following to a boil:

When the water returns to a boil, reduce heat to low. Cover and simmer until the water is absorbed, about 15 minutes.

In a large frying pan over medium heat, combine:

Sauté, stirring occasionally, until the vegetables are tender but not mushy, about 10 minutes. Then add:

Stir this mixture into the bulgur, and use to stuff

Place stuffed peppers on a non-stick surface and bake at 400 degrees 10-20 minutes (longer if chilies and stuffing are at room temperature to start, shorter if the filling is still warm).

Place chili on individual serving plate and top with:

* I have found that frozen cilantro (chop fresh cilantro finely then freeze immediately in small plastic bag or container) works well too.
VARIATION #1:


The Mayo Clinic recipe (to serve 6; 2 c bulgur) calls for 1 c diced fresh tomatoes or 14 ½ oz canned diced tomatoes, drained instead of salsa, adds 8 oz white mushrooms, coarsely chopped to the sauté, and uses parsley instead of cilantro. It also uses 3 red bell peppers, halved, stemmed and seeded and, 3 green bell peppers, halved, stemmed and seeded , not previously cooked, instead of the roasted poblano peppers. If fresh peppers are used, stuffed peppers should be covered tightly with aluminum foil and baked at 400 degrees for 40 minutes.

This recipe makes enough stuffing for 4 large red/green peppers. Rub peppers with oil and ½ t cayenne pepper, place on a baking pan and bake at 400 degrees F until softened a little. Stuff each pepper half then place in a lightly oiled, oven proof casserole dish. Add ½ c water to pan. Cover dish with foil and bake for 20-25 minutes until the peppers are tender.

In the Helmand Afghan dish called Showla, the chili was stuffed with spinach and cheese with the “grains” on the side: medium rice, mung beans and black eyed beans sautéed with onions, tomato, garlic and seasoned with dill and coriander seeds.