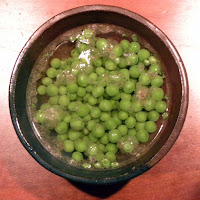 I buy about a half pound of peas in the shell per person*, a little more if I know those who I will be serving really love fresh peas (or those who will be shelling the peas love raw peas).

Fresh New England peas were one of my Dad’s most favorite foods. So much so that after he moved to Colorado, my standard Father’s Day Present was to send him overnight a small cooler of fresh peas. He not only enjoyed eating them but was always willing to sit on the deck or at the kitchen table and help shell them. However, in his opinion there was only one way to serve these peas - in the cooking water. A great aunt of mine (she was from New Mexico and did not know any better) got thoroughly reprimanded for “throwing out the pea water”. I really like and always serve fresh peas this way too.

Heat water to boiling using a ratio of

Put peas into boiling water for just about one minute if peas are small, a little longer for larger peas. Taste a sample pea and do not overcook! Peas should be a little crunchy as they will keep cooking in the hot water.

Put peas AND water into individual dishes. Add, to taste 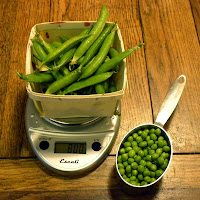 * 4 July 2014: Last night as we were shelling peas, Chris asked me for the ratio of peas in the pod to shelled peas.  Good question. I had always bought about one-half pound of peas in the pod/person but it seemed like a good time to verify this assumption.  So tonight I weighed and measured.  8 ounces of peas in the pod yields about 4 - 4.15 ounces of peas or just under 1 cup of peas. 1 cup of peas weighs about 5 ounces. One cup of shelled peas is a huge serving (probably 2) but my family loves peas.  NOTE: as seen in the photos, fully developed peas which in most cases completely filled the pod, were measured. If the peas are less developed the yield of shelled peas will be smaller. 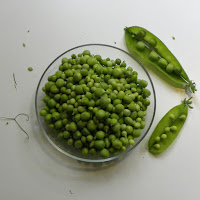