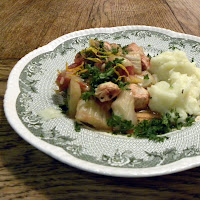 This recipe is adapted from the Mayo Clinic Williams-Sonoma Cookbook (Provencal Chicken and Fennel). I am a real fennel fan so I like this dish. For those who are not licorice inclined, try substituting canned (14 oz.) or fresh cooked artichoke hearts. Photo at left is from recipe substituting "chicken tenders" for chicken breasts. In both cases, since olive or other oil is not used for browning, the resulting chicken will be pale. Alternatively, if reducing/eliminating oil is not an issue, brown chicken in a small amount of olive oil before adding to the dish.

Cut in half lengthwise through the base, then cut each half into 4 wedges

Cook over medium heat, stirring occasionally, until the mixture comes to a boil. Reduce heat to medium-low. Arrange fennel [if using artichokes instead of fennel, add artichokes after chicken has cooked for 10 minutes] and

over the tomato mixture, spooning a bit of sauce over them. Cover and cook until the chicken is tender, about 25 minutes. Using a slotted spoon, transfer the chicken to a warmed platter.

Increase the heat to high and cook, stirring occasionally, until the sauce has thickened slightly, about 5 minutes.

Spoon the sauce over the chicken and vegetables and top with

2 T fresh parsley, chopped
[I sometimes use 2 T fennel weed, chopped, if I have it left from trimming or 2T chopped parsley and 1 T chopped fennel weed]