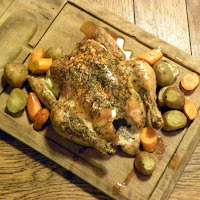 Although I used to usually stuff chickens when cooking, I now tend toward the no stuffing version. The chicken cooks a bit faster and can be served with rice or even better with roasted potatoes or root vegetables cooked simultaneously with the chicken (in separate dish to avoid coating with the chicken fat drippings). This is probably a healthier route as the stuffing tends to absorb fat from the chicken. That said, I have also included a basic recipe for stuffed chicken. The possibilities for stuffing are endless and offer an opportunity to experiment given the ingredients on hand using pecans instead of chestnuts, adding raisins or dried cranberries....

A few years ago I roasted several chickens that did not seem done. I had taken the temperature, 160 degrees F from one of my new (and subsequently one of my favorite) cookbooks. When I checked another favorite cookbook which I had used previously when roasting chicken, I found the recommended temperature for roast chicken to be 180 degrees at the thigh. I have gone back to using 180 degrees F and am happy with the results.

ROAST CHICKEN WITH NO STUFFING

STEP 1. Remove any giblets, etc. that may be placed in cavity of a 4-7 pound chicken.

Also remove any fat deposits attached to the skin around cavity opening. Rinse cavity thoroughly with cool water. Blot skin dry with a paper towel.*   Be sure to clean sink throughly after this step. (Some sources suggest omitting this rinsing step and the potential contamination  it may cause.)

Sprinkle some/all of the following herbs over the oil coated skin:

(Parsley if you have and must)
Sage
Rosemary
Thyme

Put ½ to ¾ inches of water in bottom of roasting pan (this keeps fat from burning on pan and sending smoke into kitchen), put rack on top and oil surface, put chicken on rack.

Bake 20 minutes per pound or until 180 degrees F at inner thigh.

until onion is transparent. Stir in:

[or use the spice Moogie  always uses: Bell's Seasoning, to taste, in lieu of sage and thyme]

Pepper to taste
½ c chopped cooked chestnuts (optional ; these can be purchased ready to use)

Mix thoroughly, and then stuff cavity of chicken (do not compress stuffing in process) and close cavity with metal skewer. If there is extra stuffing bake in separate bowl.


Don’t forget to save the carcass for Chicken Soup!

* Maybe because 2 balls of kitchen twine appeared in my stocking last Christmas, I have started tying the two drumsticks together.  Not necessary but more compact in the oven.

Posted by cookscache at 6:12 AM