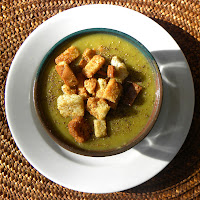 This was a good way to use up the "ham bone" when I bought ham with a bone. Since I don't do that much anymore, I usually make the vegetarian version. This soup is good served topped with a few croutons. 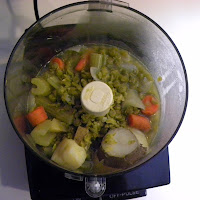 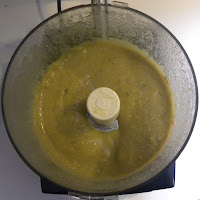 Rinse the peas under cold water and pick over to remove all foreign particles. Place the peas in a large kettle, add the water, cover and let stand overnight. Or boil two minutes and let soak one hour.

Add the vegetables and ham bone to the peas. Cover and bring to a boil. Reduce the heat, skim foam from the top and simmer gently for two hours. If ham bone has been used, remove the bone and reserve any meat still on the bone. Allow soup to cool and then skim any fat from the top.

Puree the soup in the bowl of a food processor fitted with a steel blade* (this will need to be done in batches).

Return the soup to the kettle and, if desired, add chunks of ham and/or any ham reserved from the bone. Season to taste with salt and pepper.

* April 2013: Just made some Beet Soup with Cumin with an immersion blender (see Cool Tools 3). Wow! The prep time is shorter and the clean-up much easier. Going forward I will be using the immersion blender instead of the food processor for all pureed soups. December 2014: Immersion blender works very well with this soup.