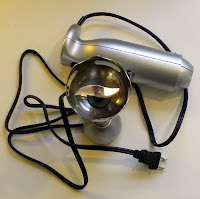 Cool Tools, Cools Tools 2, and Cool Tools 3 feature books and kitchen tools I have cooked without for many years, but now find incredibly valuable additions to my kitchen. Most all of these just weren't available, or readily available in their current form, when I started cooking. 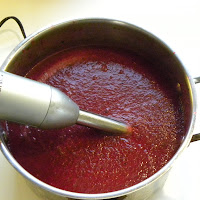 When I was making Pea Soup from the leftover Christmas Eve ham, Alexandra asked incredulously, "Don't you have an immersion blender?" Then upon my response added, "You really should get one."  I recently did and Alexandra, as usual, is absolutely right. Making soup, especially soup with beets, really trashed my kitchen. By the time I had ladled the soup, in batches, into the food processor, pureed the soup, poured it into a bowl, then processed the next batch I had soup dripping down the sides of the pan, processor, and bowl and on the counter. 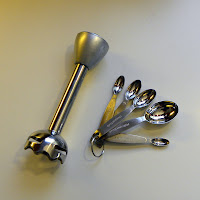 The immersion blender purees a large kettle of soup in just a couple of minutes. No food processor bowl or holding bowl required. The only two items requiring washing are the soup pan itself and the end of the immersion blender which can go into the dishwasher (photo left, spoons for scale). This tool makes making pureed soup so much easier I will be making  Pea Soup, Carrot Soup,  Beet Soup, Gazpacho/Solmorejo, Pumpkin Soup and Potato Leek Soup  and other pureed soups much more frequently. 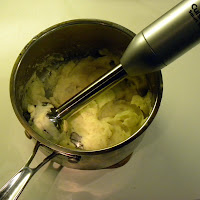 In addition, I have found the immersion blender works fairly well for Parsnip and Fennel Puree. Because this mixture contains less liquid than soup, the blending takes longer and the end result is not quite as silky as when done in a food processor.  Botton line, when I am just cooking for Ed and me, I'd probably use the immersion blender for this recipe, when cooking for a larger group, the food processor.