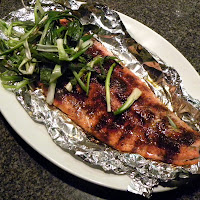 For Christmas Chris, Alex and Dan gave Ed and me Alaskan Sockeye Salmon, caught by friends of Alex and Dan --- sort of a CSA of fishing --- to be delivered this spring along with some sugar rub made from a recipe on The Alaska Seafood Website. Eager to try the rub even before the gift salmon arrived, we purchased some salmon.  Yummy!  And particularly good served with grilled scallions. We went through Dan's batch of rub and made another.  Now we are eagerly waiting for our Christmas salmon to arrive. 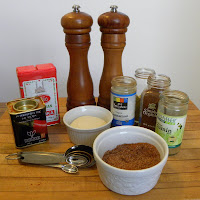 The first step is to combine: 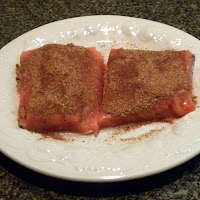 The recipe says this rub will  do 4 to 6 fillets, but does not specify the weight.  Dan just spreads a little olive oil on the fillet(s) then liberally applies the rub.  The Alaska Seafood Recipe calls for heating 2 T of canola oil in a large heavy pan over medium-high heat, carefully placing salmon fillets in the pan, seasoned side down, cooking about 2 minutes to sear then turning fillets over, reducing heat to medium and continuing to cook 6 to 8 minutes just until fish is opaque throughout.  For a good demonstration on applying a rub (albeit a different one) and pan cooking see Mark Bittman's video, Four Spice Salmon. 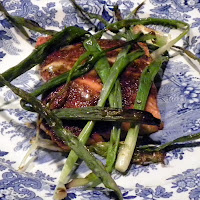 Ed grills the fish on a gas grill, on low heat with the cover down. He places the salmon on aluminum foil, skin-side down, rub-side up and cooks for ~10 minutes until the fish is ~120 degrees. After he removes the fish from the grill the tempertaure continues to rise to ~125 degrees. He previously cooked it, based on the "fish setting" on our thermometer to ~130 degrees (135 by the time it reached the table). We've recently gone rarer based on Harold McGee's recommendation in On Food and Cooking:  "In general, fish and shellfish are firm but still moist when cooked to 130 - 140 degrees F.... Some dense-fleshed fish, including tuna and salmon are especially succulent at 120 degrees F, when still slightly translucent and jelly-like. ...some fish, Atlantic salmon, for example - can develop an almost custard-like texture if heated gently to 120 degrees F...."* We have achieved this custard-like texture but so far only with King  Salmon. 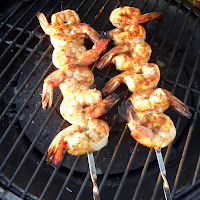 June 2013: This is an excellent rub for shrimp too! 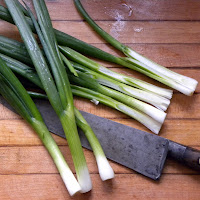 If the scallions are large, slice then in half vertically.  Lightly coat with

and grill until soft but not charred. 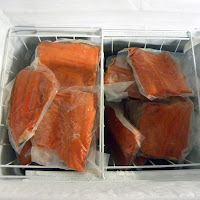 July 2013:  The salmon arrived and what a treat!  Better than the fresh sockeye we have been getting in the local market. 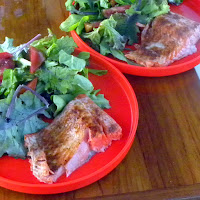