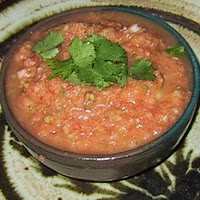 The first recipe is from Alex - the soup she made for Ed and my “Anniversary Dinner” in August 2002. Afterwords, Alex and I concluded that maybe a gazpacho without the bread might be preferable, so I’ve also included such a recipe adapted from The Whole Foods Market Cookbook

For further discussion of Gazpacho see the update at the end of this post. See also Solmorejo.

1) Briefly immerse tomatoes in boiling water to loosen skin
2) Peel, cut, and place in food processor
3) Add moistened, drained bread slices
4) Add other ingredients
5) Process briefly. This should result in a thick gazpacho, not a puree.
6) Chill and serve.

In a food processor fitted with a metal blade, pulse to chop coarsely the following ingredients (unless the processor is commercial size, the vegetables should be processed in two batches)

Remove the chopped vegetables and place in mixing container that can be stored in the refrigerator, then add:


While  developing a recipe for Celery Sorbet, which is an excellent garnish for any form of gazpacho, I revisited recipes for this soup and began to wonder what gazpacho really is.  "Gazpacho has ancient roots. There are a number of theories of its origin, including as an Arab soup of bread, olive oil, water and garlic that arrived in Spain with the Moors, or via the Romans with the addition of vinegar" Once in Spain it became a part of Andulusian cuisine... using stale bread, garlic, olive oil, salt, and vinegar."  Some how along the way tomatoes also became dominate and today we think of gazpacho as a cold tomato, bread soup of Spanish origin. In fact many modern versions (such as the Whole Foods recipe above) do not use bread and also incorporate vegetables other than those (pepper, cucumber, onion) traditionally used. An example of this is Mark Bittman's recipe for Tomato Melon Gazpacho.  I loosely adapted this recipe as follows using canned crushed tomatoes, eliminating the additional water, and using lime juice rather than lemon and fresh cilantro rather than basil. 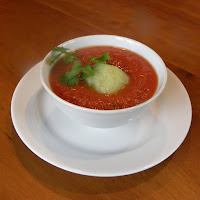 Saute, just until the melon becomes juicy, about 2 minutes:

Place cantaloupe in the bowl of a food processor* and add:

Process until very smooth, then add:

And pulse until cilantro is finely chopped.

Serve garnished with Celery Sorbet and a fresh cilantro sprig. 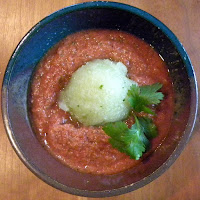 Process* until mixture is very smooth.

Serve garnished with Celery Sorbet and a fresh cilantro sprig.

Bottom Line - So Many Choices

The Tomato-Melon Gazpacho was OK; might have tasted better on a hotter day, or made with fresh tomatoes.  The Canned Tomato Gazpacho was good but I think I preferred the clarity (no peppers or cucumber) of the Salmorejo, especially when served with the Celery Sorbet. I also prefer the smooth/puree texture of the soup when paired with the sorbet.