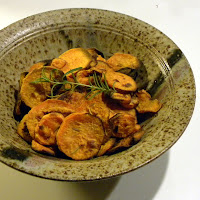 Olive oil for spraying the potatoes

Ed made these for me for a birthday dinner from a recipe I think he picked up at Bread and Circus. I have managed to loose the actual recipe but this is the version I have made since.

Follow the directions above, except use garnet yams if available, omit  marmalade and lemon juice, and toss yam slices with:

before placing potatoes on the oiled baking sheet.