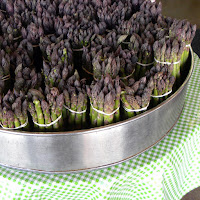 I've been waiting almost ten months for this!  Friday I walked into Verrill Farm and was greeted by the first asparagus of the season. The farm separates the asparagus by size so I bought a bunch with the smaller diameter spears.  I brought it home and immediately put it in a dish of water, just as it is stored at the farm. The highlight of dinner was a plate of asparagus. Cooking fresh asparagus gave origin to the expression, "As quick as you can cook asparagus!".  I cooked it for two minutes in boiling water, let it sit for one minute and ate it as is - nothing added - absolutely awesome!

On Saturday lunch was warm (cooked as above) asparagus on toast, with just a bit of butter on the toast and just a few micro greens (also in season at Verrill Farm) on top. Occasionally I will also add a bit of mayo, well actually Spectrum's Light Canola Mayo. For my Dad,  fresh asparagus demanded a piece of buttered toast under it, even when served for dinner.

I think back to my first introduction to asparagus, it was probably asparagus from my Grandfather's garden in New Hampshire.  What I really remember, however, was asparagus picking around my Grandmother's house in Las Cruces, New Mexico.  Asparagus grew wild in most of the larger irrigation ditches near where she lived. These ditches were full of water only a few times a week at most. In the interim it was possible to walk down the middle of the ditch and pick the wild asparagus that grew on either side, the largest the diameter of a pencil, and absolutely delicious. 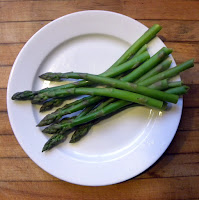 In  Animal, Vegetable, Miracle; A Year of Food Life Barbara Kingsolver writes about harvesting asparagus, nothing for the first two summers as the plant matures, then only two weeks of harvest the third summer. Mature plants have a longer but still short season:

"After about eight weeks of daily cutting, the asparagus farmer puts away the knife, finally letting the spears pass beyond edibility into the lanky plants they long to be. For most crop species, the season ends when all the vegetable units have been picked and the mother plant dies or gets plowed under.  Asparagus is different: its season ends by declaration, purely out of regard for the plant.  The key to the next spring's action is the starch it has stored underground, which only happens if the plant has enough of a summer life to beef up its bank account. Of all our familiar vegetables, the season for local, fresh asparagus is the very shortest for this reason."*

Later in the chapter she continues:

"At our house we only eat asparagus for the weeks it's in season, but during those weeks we eat it a lot - the spears must be cut every day.  About the same time the asparagus plant is getting weary of our management plan, we're starting to feel the same way.  It works out." **

After having fresh, local asparagus, nothing else compares.  To avoid disappointment Ed and I tend to eat asparagus only in season. Living near an asparagus farm our standards are very high and reaction to the "imported variety" is not unlike Michael Pollan's who writes in The Omnnivore's Dilemma: 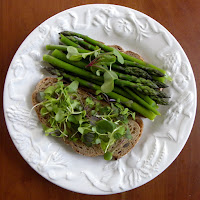 "The ethical implications of buying such a product [imported asparagus] are almost too numerous and knotty to sort out: There's the expense, there's the prodigious amounts of energy involved, the defiance of seasonality, and the whole question of whether the best soils in South America should be devoted to growing food for affluent and overfed North Americans. And yet you can make a good argument that my purchase of organic asparagus from Argentina generates foreign exchange for a country desperately in need of it, and supports a level of care for the country's land - farming without pesticides or chemical fertilizer - it might not otherwise receive. Clearly my bunch of asparagus had delivered me deep into the thicket of trade-offs that a global organic marketplace entails.
Okay, but how did it taste?
My jet-setting Argentine asparagus tasted like damp cardboard.  After the first spear or two no one touched it.  Perhaps if it had been sweeter and tenderer we would have finished it, but I suspect the fact that the asparagus was out of place in a winter supper made it even less appetizing. Asparagus is one of a dwindling number of foods firmly linked in out minds to the seasonal calendar." ***

Realizing the season is short, when asparagus is locally available Ed and I eat it a lot too - usually for dinner and often warm/cold in sandwiches the next day. A few springs ago I had just finished Kingsolver's book when Ed walked into the kitchen, saw the asparagus I had just purchased and said, "Asparagus again?"  The next day when I stopped by Verrill Farm I found their asparagus season was over. It works out.

During asparagus season also check out the following recipes:
Grilled Veggies
Sesame Noodle Salad with asparagus
Winter Squash - Sage Risotto  with asparagus and make it seasonal, use parsnips instead of squash