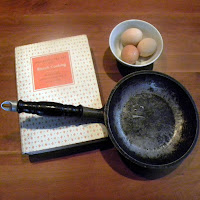 I started last Wednesday joining a friend from my Cambridge years at a Dartmouth event whose speaker touched on The French Chef  series and organic gardening, and ended the day at a Harvard event that gave an overview of a course introduced at Harvard this fall: Science and The Physical Universe 27 (SPU 27), otherwise known as: Science and Cooking: From Haute Cuisine to Soft Matter Science.

The first talk was given by Russ Morash who worked with Julia Child producing The French Chef and her subsequent cooking programs.  He also spoke about producing and directing This Old House, The Victory Garden, and The New Yankee Workshop. Morash described his first meeting with Julia Child when she arrived on the WGBH (PBS) set of I've Been Reading in 1961 to discuss her recently published Mastering the Art of French Cooking, and how using a hot plate she whipped up a French omelette. The viewer response was so positive that at WGBH's request Morash soon found himself producing 3 pilots for The French Chef. The rest is history. Julia Child in large part generated the rising wave of America's interest in food and the resulting cookbooks and cooking shows that followed.  When I moved to Cambridge in the late sixties the Pot Shop was a busy culinary store whose best selling item was probably The French Chef Omelette Pan (in photo above). Child's Cambridge kitchen is now an icon at the Smithsonian.


After sharing several "Julia anecdotes" which spanned over 30 years of work together, Morash moved on to talk about The Victory Garden and his continuing involvement with organic gardening.  It must be a team effort as his wife, Maria Morash's  The Victory Garden Cookbook  has, since its publication in 1982, been my favorite reference on local garden vegetables.


The morning talk reflected on the past and the merits of organic cabbage and potatoes, the afternoon lecture by Harvard Professors David Weitz and Michael Brenner focused on the science of food preparation. Harold  McGee writes in the appendix to On Food and Cooking: "Cooking is applied chemistry, and the basic concepts of chemisty - molecules, energy, heat, reactions - are keys to a clearer understanding of what our foods are and how we transform them."* The goal of  SPU 27 is to introduce concepts of math and physics and, recognizing the common interests chefs and scientists share, illustrate the equations presented through the medium of cooking.   On Food and Cooking was the textbook, supplemented by handouts from Harvard's physics department. One session each week introduced an equation and the concept behind it,  the second session featured various celebrated chefs who prepared food to illustrate the concept given in the equation.  In addition, the students participated in one laboratory (edible) each week, took two exams and prepared an exhaustive final project.


In the introduction to the second edition of On Food and Cooking, McGee writes:


"A lot has changed in twenty years! It turned out that On Food and Cooking [first published in 1984] was riding a rising wave of general interest in food, a wave that grew and grew, and knocked down the barriers between science and cooking, especially in the last decade.  Science has found its way into the kitchen, and cooking into laboratories and factories."**


"Professional cooks have also come to appreciate the value of the scientific approach to their craft.... A number of culinary schools now offer 'experimental' courses that investigate the whys of cooking and encourage critical thinking. And several highly regarded chefs, most famously Ferran Adria in Spain [elBulli] and Heston Blumenthal [The Fat Duck Restaurant] in England, experiment with industrial and laboratory tools - gelling agents from seaweeds and bacteria, non-sweet sugars, aroma extracts, pressurized gases, liquid nitrogen - to bring new forms of pleasure to the table....


.... One effective and charming force behind this movement was Nicholas Kurti, a physicist and food lover at the University of Oxford, who lamented in 1969: 'I think it is a sad reflection on our civilization that while we can and do measure the temperature in the atmosphere of Venus, we do not know what goes on inside our souffles.'"***


In 1992, Kurti organized an International Workshop on Molecular and Physical Gastronomy at Erice, Sicily that for the first time brought together university and food industry scientists and professional cooks to work together to advance gastronomy. Renamed "International Workshop on Molecular Gastronomy 'N. Kurti'" in memory of its founder who died in 1998 at the age of 90, the workshop continues under the direction of Herve This. Molecular gastronomy is indeed taken to new extremes when  practiced by chefs such as Adria, who developed processes, and subsequent commercialization of these processes, such as Culinary Foam, Sferificación, Gelificación, and Emulsificación. Adria was one of the inspirations for the Harvard course and his Alicia Foundation helped in the preparation of the course materials.

The closest I have come to this cutting edge is the orange froth on the shrimp risotto, Ed and I had in Las Vegas and a tortilla Ed had at a tapas bar near the Prado in Madrid. When Ed ordered the tortilla the waiter warned him that, "It would be liquid."  The foamy tortilla was as awful (perhaps a good idea, badly executed) as the orange froth was delicious.  While it is fun to read about recent culinary innovations, I'm still focused on doing interesting things with local food.  Even if not in an exotic way,  I look forward to what more science in the kitchen can do for me..  After many miserable failures with cooking a roast, at Christopher's urging I bought a remote thermometer.  I was amazed to see how slowly the temperature increases at first and how fast, exponentially?, it increases as the meat approaches doneness and directly after it is removed from the oven.  Sometime when I am not cooking a roast under holiday circumstances and have the time, I would like to plot the temperature change. 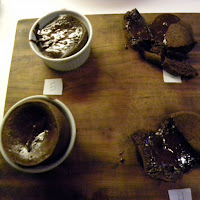 Back to the lecture: In addition to giving us an overview, the professors shared parts of the week 4 lesson and lab (to do at home): "Heating, Cooling and Tempering".  Stay tuned while I try to discover what "Molten Chocolate Cake" (6 actually) can tell me about time-temperature curves for various locations within food, the parameters that affect the length of time one heats food, and how temperature and time can engender molecular transitions that determine the texture of foods.  Maybe this will even answer some of my questions about cooking a roast.... 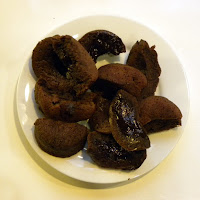 In the meantime: The number of students wanting to take SPU 27 was so large that, given the 300 person cap on the course, only 44% could be accepted.  The professors pointed out to the students applying for the lottery that their comparative odds were pretty good;  only ~10% of those applying to Harvard are accepted and only ~0.5% of those applying for dinner reservations at elBulli are successful.  Given the interest in this course, an evening lecture program was also offered.  The public talks will resume, as will the course, in the fall of 2011.
.