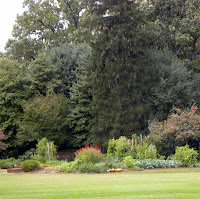 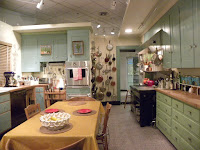 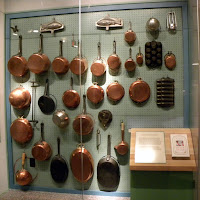 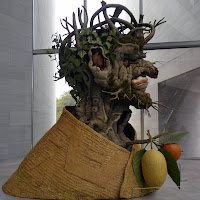 Ed and I spent a few days last week in DC - he on business, me for fun.  We drove down on Sunday, meeting Christopher at Vesylka in his old East Village neighborhood for brunch (his breakfast, our lunch). The company was awesome and the borscht did not disappoint.

On Monday I had a long walk enjoying the unseasonably warm weather and caught a view of the White House vegetable garden. Happiness turned to sadness as I walked along the Vietnam War Memorial, so many names... and thought of the next memorial we will soon be building, so many names, so young and so many permanenly disabled.... That evening Ed and I went to the Smithsonian American Art Museum and saw a special exhibit (runs through January 2, 2011): "Telling Stories: Norman Rockwell  from the Collections of George Lucas and Stephen Speilberg" before having a tapas dinner at Zaytinya  (Turkish, Greek and Lebanese inspired cuisine). The Garides me Anitho, (sauteed shrimp, dill, shallots, mustard, lemon juice), was especially good.  Marine 1 and two escort helicopters flew directly over our heads as we crossed the Ellipse walking back to the hotel, Marine 1 then landing on the South Lawn.

Tuesday I went to the Smithsonian to see, among other things, Julia Child's  Kitchen, indeed one of the most popular exhibits that day.  I remember our first kitchen in Cambridge.  The entire (but not very big) end wall was covered with a blue peg board on which I hung all my orange Creuset pots and pans (wedding presents) as well as black cast iron items, wood rolling pin....  I did not draw outlines around anything though as I did not have much stuff or many people in the kitchen. Both days I had lunch at the National Museum of the American Indian.  The museum is not my favorite but the food in Mitsitam (Let's Eat) Cafe has to be the best on the mall and very good in its own right.  The Cafe features a Native inspired menu representing five different regions of the Western Hemisphere made with natural and locally grown ingredients. I finished my day at the National Gallery of Art seeing old favorites, though unfortunatewely the Miro tapestry originally in the main lobby has been removed  and Dali's The Sacrament of the Last Supper was blocked by supplies for an evening reception. I also saw two special exhibits, one featuring the drawings of Edvard Munch and the other, Arcimboldo (runs through January 9, 2011). The Arcimboldo paintings, reflecting the serious study of science and nature that was characteristic of the sixteenth century are also clever intellectual puzzles, in fact, according to the exhibit guide, viewed as scherzi or jokes by Arcimboldo's contemporaries.  In the  lobby of the East Wing outside the exhibit is a large contemporary  sculpture depicting the Arcimboldo painting "Winter".  In the evening, another unseasonably warm night, Ed and I walked around Georgetown (not as "cool" as Ed remembered) then back to the mall. Having cleared the wait-list at the popular Rasika , we had an excellent dinner there. Rasika is an Indian restaurant (which boarders on Indian fusion); I had a shrimp curry and Ed a lamb one, neither of which I will try to duplicate. I will be giving some thought to trying to make the delicious dessert we had, date and toffee pudding with berries. Stay tuned.

Posted by cookscache at 6:42 PM