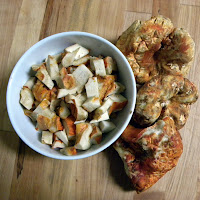 When I was visiting Alexandra and Dan in April 2009, we went to one of my favorite places in Portland, the Saturday Farmer's Market. So much good stuff to choose from, but the selection of mushrooms is incredible. Among other things, we got some great lobster mushrooms (about a pound I think but perhaps more) and some leeks.  This led to  Lobster Mushroom and Leek Risotto for dinner that night.  Any question about where the name "lobster" mushroom comes from should be answered by the photo at left.

In a large skillet, sautee: 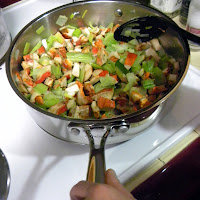 2 chopped leeks, white and pale green part only (though we pushed the "pale green" part)
1 clove garlic, minced
and cook, stirring, until the leeks begin to soften. 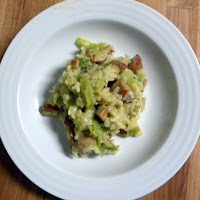 1-2 pounds lobster  mushrooms, stems trimmed and caps and stems coarsely chopped
Season with salt and pepper to taste, and cook stirring, until the mushrooms are tender. Set aside.

In another pan heat 3 T olive oil/butter or a combination then add:

1/2 c onion, finely chopped
and cook 3 minutes until the onion begins to soften

1/2 c dry white wine, and cook, stirring, until wine is mostly absorbed by the rice.

ABOUT ¾ CUP AT A TIME, stirring well after each addition until the broth has been mostly absorbed by the rice.  Continue to add broth, stirring, until the rice is tender but firm, al dente, about 20 minutes.

Turn off the heat, stir in one last addition of broth, the leek and mushroom mixture and :

Stir until the cheese melts and is incorporated into the rice. Serve immediately.

Posted by cookscache at 2:00 PM