The Spanish Pyrenees to Perpignan France

The highlight of Ed's and my recent trip to Spain was hiking in the Pyrenees which we in fact decided to do at the last minute after Condor was hauled on September 2nd due to hurricane warnings for Earl.  With the boat high and dry and no tickets yet for the conference in Perpignan where Ed was to give a paper, we decided to go 5 days early and drive from Barcelona to Perpignan via Torla and Espot.

TORLA: We arrived in Torla on Thursday September 16th, after a lunch stop at the Medevial city of Ainse which we found quite serendipitously. The following day we had a magnificent hike in Parque Nacional de Ordesa. The day was overcast and clouds blew in and out as we crossed the Rio Arazas and climbed steeply (600 meters vertical) through the woods on the Senda de los Cazadores (Hunter's Path) on the valley's south side. We reached a point which reminded us of the Old Man of the Mountain (NH) then a overlook on top of the "head of the Old Man".


From there we followed the Faja de Pelay (mostly level or downhill) to the Circo de Soaso and the Cola del Caballo (Horsetail) waterfall.  We returned by the path along the valley floor passing several other waterfalls before being caught in a drenching rain storm which continued the last half hour of our 12 km hike.  By the next morning the weather had improved and we hiked up to the waterfalls we had missed in our run in the rain. We stayed at the Hotel Abetos in a room with a beautiful view toward the mountain and ate both nights at El Duende (good regional food) as the town is small with not a lot of interesting options.


ESPOT:   On Saturday afternoon we drove through several mountain passes, one in thick fog to Espot.  The Hotel Surat where we stayed, the original hotel in Espot, shows it age. Our room was clean and had a view of the mountains but the large dining room was used only for breakfast (most likely still open in season). Tired, we opted for pizza in their crowded grill. The following morning we took a jeep taxi (leaves from the center of town as soon as it is filled with 6 passengers) to Estany de Sant Maurici (part of Parc Nacional D'Aiguestortes I Estany de Sant Maurici).  From here we headed up the trail to Port de Ratera d' Espot. We followed the directions downloaded from the Lonely Planet.

Jeep tours go to the first part of the trail and continue around the lake so this part of the trail is wide, easy and crowded until the fork soon after Estany de Ratera.  Here we took the right fork and hiking became steeper and rockier.  If Ordesa is a hike of waterfalls, this is certainly a hike of lakes; an occasional waterfall but well over a dozen beautiful blue lakes. We continued across some rocky scree to Refugi d'Amitges then to Port de Ratera d' Espot where we ate lunch. Returning, we took the right hand forks so repeated  little of the first part of the 14.5 km hike.  For dinner we tried Hotel Roya which had a very good regional menu.  Ed had an excellent Andalusian gazpacho and I had my first taste of salt cod with tomatoes (served cold as an entree) which was very good both entrees followed by lamb. 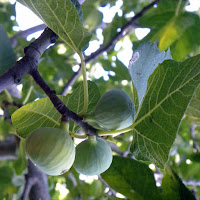 PERPIGNAN: Monday morning we drove through more mountain passes to Perpignan.  Following his Garmin Ed wound up in the narrow streets of the old city. After a very challenging u-turn we headed to the parking garage then walked to Hotel de Loge. This is a  restored mansion in the heart of the old city.  It apparently fell into some disrepair under the former owners but the new owners, Mireille and Herve Barruad have done an excellent job restoring the public spaces.  The bedrooms could still use some refurbishment but the Barruad's  helpfulness more than compensated for the worn carpets.  They recommended two excellent restaurants, Le Figuier and La Table (now closed).  Monday night was business and mediocre tapas. On Tuesday night we ate at Le Figuier and I had a white fish on potatoes with an aioli topping; very good.  I'm tempted to try it at home but somewhat deterred by the requisite butter.  The show stopper was the fig tart; a pastry shell with whole poached figs. Figs have a very limited season but I was able to find some when I returned home and did a yummy poached fig dessert.  The next night we attended the conference banquet. I never look forward to these events and was pleasantly surprised.

The banquet was in an old Gothic church that had been stripped of all things religious. Colored lights played on the stone walls and a dance band played in the distance so we could talk above the music.  The food was excellent as was the conversation since we sat at a table with some of Ed's younger clients. On Thursday night we went to La Table, a newly opened bar and restaurant.  I had fish with crispy leeks on top and Ed had fish on a bed of potatoes topped with a pastry lattice and mushroom sauce.  I have since done a similar dish at home (minus the pastry lattice which Ed keeps asking for).

Posted by cookscache at 3:34 PM