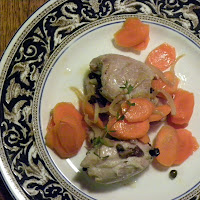 Roberto Medoro, the owner/chef of Mas Fontanelles, a delightful "Hotel Rural - Restaurante"  in Biar, Spain was kind enough to share the recipe for a dish he had cooked for Ed and me the previous night.  While he carefully explained the proceedure, he apologized that he did not measure the ingredients, just did it by eye. Since I often cook this way (and have had to make a point of measuring when checking out recipes for this blog), I can appreciate his approach.  To date I have made this by  "by eye" so offer photos but no exact measurements. While Ed and I have enjoyed this rendition, neither of my attempts have met the bar set by Mas Fontanelles in either taste or presentation. Perhaps it is a combination of my reluctance to use butter,  the size of the chicken pieces I have used,  not exactly hitting the magic combination of the "mixture", or no doubt the exaggerated memory of a perfect evening. 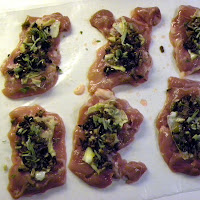 Slice open so they are still in one piece but lie flat and stuff with: 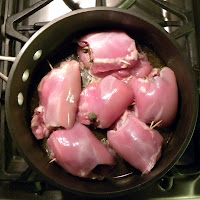 In a skillet large enough to accommodate all of the chicken, heat to cover bottom

Sautee until chicken is nicely browned on the bottom, then turn chicken and brown opposite side. Add:

While chicken is cooking prepare:

Saute in a separate pan; cooking the chicken and the carrots separately makes it much easier to get each cooked to perfection, with [a small amount of]:

Cook until the onion is wilted and the carrots are just barely soft. [Do not overcook and if it appears carrots will be ready before chicken turn off heat under pan before carotts are fully cooked].

When the chicken is cooked through, place on individual plates and top with the onions and carrots.

At Mas Fontanelles the chicken was served with fresh grilled asparagus. 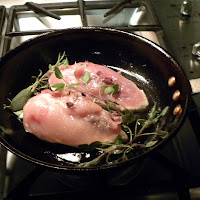 VARIATION:  Mr. Medoro said he constantly varies the stuffing "mixture", using different kinds of olives (black, green or both), sometimes adding sun-dried tomatoes (which have been boiled for one minute).

January 2012: VARIATION (photo left): While this is really best with second joints, I also make this with boneless chicken breasts (much less fatty than second joints) and when my herb garden is bountiful, throw a few extra sprigs of sage into the sautee.