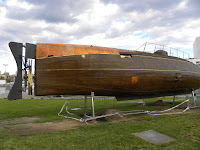 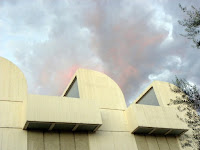 Ed's memories of Barcelona,  navigating with a map with street names in Spanish while the street signs were in Catalan, were not the best.  I hoped with the GPS this trip would be different. We had reservations at El Jardi a small hotel on Placa Sant Josep Oriol in the heart of  Barri Gotic; the rooms are very small but very clean and the location is excellent. The GPS took us right to the foot of the Ramblas which was closed to vehicular traffic due to pedestrian crowds.  The GPS proceeded to take us to every street with access into Barri Gotic and we found each street in turn to be closed also. Finally on our second circumnavigation of Barri Gotic, a policeman let us go up the Ramblas to the first parking garage, near Placa Reial. We hoofed it from there, getting separated from each other in the dense crowds that had gathered all through Barcelona for a huge music festival.  Ed found the hotel about nine o'clock, half an hour after I did.  By then we had missed our reservation at Cheriff, a restaurant recommended for its paella by Mark Bittman, and they were unable to take us later in the evening or the next evening.  We settled for tapas in the square near the hotel. The next day we walked, first taking in Gaudi buildings in L'Eixample though we chose not to stand in the long lines to see the inside of La Sagrada Familia again. As we walked around Barcelona we saw huge sound stages set up on most every large public plaza reminding us of the previous night's crowds.  We stopped for lunch at Cafe Viena on the Ramblas touted by Mark Bittman as having the "world's best sandwich".  The Jabugo, salt cured ham,  was excellent but little of the fat had been trimmed off (see photo in the NY Times article - the white stuff is pure fat) and the bread was excellent but, best sandwich I've ever had?  Not so sure.  In the afternoon we went to Ed's favorite, Santa Maria del Mar then on to the waterfront where Ed was fascinated by an old wood submarine, up to Montjuic and finally to Foundation Miro. For dinner, we found a local crowd and excellent paella at Elche though I would make the same comment about Elche's paella that Bitman made about Cheriff's: "Unfortunately, the waiter didn’t let the rice sit in the paella pan long enough to form a socarrat, the golden carmelized crust formed at the bottom of the pan." 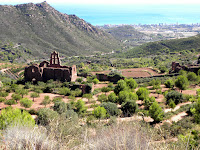 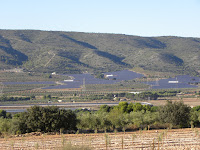 The next morning (September 26th) we headed for Biar.  Ed needed to be near Almeria on Monday night so he suggested I pick a place about half-way between Barcelona and Almeria for Sunday night. In the course of finding a place, I discovered Inns of Spain and the Mas Fontanelles in Biar.  This small inn ("Hotel Rural - Restaurante") looked like a delightful spot to break our drive.  At lunch time we were near Benicassim.  We got some bread and cheese there then drove a short distance into the hills to Desierto de las Palmas, a hilly nature reserve with a Carmelite monastery (1697) at its heart. We ate our lunch overlooking the Mediterranean in the distance.  Just before we got to Biar, I noticed a large lake, then realized the "lake" was sloping.  This turned out to be a large PV installation in Beneixama, nestled into the landscape.  We had a quick walk around Biar, a tiny medieval town surrounded by hills with olive trees, then checked in at Mas Fontanelles where we found we were two of  four overnignt guests (the inn has only 8 rooms and is, I suspect, more of a weekend/holiday destination) and the only dinner guests.  We arrived at the dining room at the appointed time where the chef/owner, Robert Medoro, greeted us with a plate of red and yellow sauteed peppers and wonderful fresh bread.  This was followed by excellent stuffed chicken thighs (more on this later) and fresh asparagus grilled to perfection.  Dessert was a delicious lemon tart. One of the best dinners of our trip!  In the morning when I was checking out I told Mr. Medoro again how much we had enjoyed the inn and dinner and asked if he might share the chicken recipe - see next post :-)

Posted by cookscache at 5:57 PM