As we headed from Seville to Madrid on the AVE (one of Spain's super fast trains) on the afternoon of October 2nd,  I found a restaurant described in Lonely Planet's Spain that looked interesting: "Naia has a real buzz about it, with a cooking laboratory overseen by Carlos Lopez Reyes, delightful modern Spanish food.... The emphasis is on natural ingredients, healthy cooking and exciting tastes." I made a reservation for dinner that night.  From Hotel Moderno on Puerta del Sol, where Alex and I had stayed during our trip to Spain in 2002, Ed and I walked through Plaza Mayor and past many tapas bars until we came to Plaza de la Paja and Naia Bistro. Revisiting the menu as I write this, I find the menu has changed considerably to suit the season.  For example, on a warm October night, we started our meal with an Solmorejo - Andalusian gazpacho with celery and lemon sorbet. The gazpacho, like most Andalusian gazpachos was very smooth (not like the chunky soup I usually make and most likely contained bread) and the sorbet was awesome. Next we had wrinkled potatoes with two sauces.  The "wrinkled potatoes" were not exactly what we expected - small round potatoes cooked to perfection, with a slightly wrinkled skin.  I recently got some small carola potatoes at Verrill Farm, boiled them for a few minutes then Ed finished them on the grill.  The effect was very similar. These were served two sauces: "mojo verte and spicy [red] mojo sauce". This was an excellent entree for our main courses which came without any starches or vegetables. Ed had blackened red tuna steak  and I had confit cod with carmelized onion and boletus ali-oli sauce.  Salt dried cod is very common in Spain, served both cold with tomatoes and hot with among other things carmelized sauce.  I had versions of the latter on several occasions but this was by far the best. (For my attempt with fresh cod see: Cod with Caramelized Onions and Mushrooms). For dessert we shared  lime mojito sorbet with rum. brown sugar and mint. This was a perfect finish and a dessert I intend to revisit next summer.  From start to finish this was one of the two best meals we had in Spain (see Barcelona to Biar for the other).

The following morning we got up early to be among the first to arrive at the Prado.  I had just finished reading Terry Tempest William's Leap and was delighted to have Room 56A with Boch paintings including The Garden of Earthly Delights and Table of the Seven Deadly Sins to ourselves for some time before any other visitors arrived.  I had been to the Prado with Alexandra in 2002 but this was Ed's first visit and he along with me enjoyed the awesome collection of Velazque paintings as well as those of El Greco and Goya. His favorite, however, is Raphael's The Cardinal.  From the Prado we went to the Museo Nacional Centro de Arte Renia Sofia.  Again a first for Ed and a return visit for me. We saw Guernica again as well as a model of the Pavillion that Jose Lluis Sert designed to house this painting for the Paris International Exposition in the 1937 Worlds Fair.  After a tapas lunch at a nearby restaurant our final stop for the day was at the  Thyssen-Bornemisza Museum, a collection of over 800 works collected by the Thyssen-Bornemiza Family over two generations.  We focused mostly on the nineteenth and twentieth century works which included a lot of paintings with marine themes our favorites of which were Kingston Point Hudson River by Francis Silva (1873) and Summer Clouds by Emil Nolde (1913).  A Miro favorite, Mujer, Pajaro y Estrella (a print of which hangs in Alex's Lincoln bedroom) and which Alex and I enjoyed when we were there was no where to be found and apparently is no longer at this museum.


Along the way we took time to admire the Caixa Forum Museum Le Mur Vegtal designed by Patrick Blank (photo below, left).  The plants are grown hydroponically in felt pockets attached to a rigid plastic backing. We also did a walk in the light rain through the Royal Botanical Garden next to the Prado where we serendipitously ran into an excellent photo exhibit, Imagenes de un Siglo en Espana, one hundred mounted photos depicting the history and daily life of Spain for the past century, actually 114 years starting with Spain's departure from Cuba in 1896. 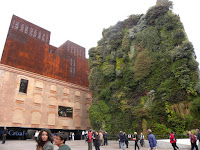 We made it back to the hotel as the rain intensified and were glad we did not have to walk far for dinner.  Based on a good review in Lonely Planet's Spain we decided to try La Finca de Susana. Since this restaurant does not take reservations and we had seen a fairly long line there the previous night we arrived shorthly after their eight thirty opening and found the restaurant close to full.  It felt like having lunch at Google (though the food was not as good), I really had to look to find anyone much over thirty, and the few diners who looked over forty appeared to be there with their children and the children's friends. The setting was good but the food was mixed.  My lamb leg  (actually lamb shanks) with fig sauce was excellent and inspired me to try a similar dish when we returned home.