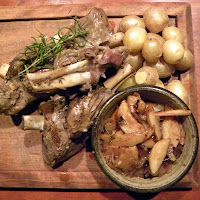 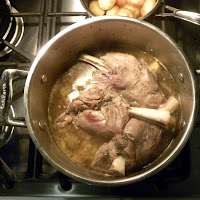 When travelling in Spain recently Ed or I occasionally ordered leg of lamb and soon discovered this usually meant lamb shanks - a favorite of my Mom but something I seldom, if ever, cook.  Long ago, my Mom gave me her recipes for "Lamb Shanks Tra La" and  "Mid Eastern Lamb Shanks" (see recipes at end) but I liked the elegance of the lamb shanks I had recently at La Finca de Susana in Madrid.  These lamb shanks were cooked simply (as I try to reconstruct below) and served with an accompanying fig sauce.  This makes sense to me as this is a rather fatty cut and much fat accumulates in the cooking water.  Removing the lamb completely from the cooking stock and serving the moist tasty meat separately seems to reduce the fat consumed.

Serves 3-4, depending on size of lamb shanks


Heat  in a deep skillet or casserole sized so that lamb shanks just cover the bottom:

Alternatively broil lamb shanks (as in Mid Eastern Lamb Shanks) turning once or twice until browned on both sides.  No oil necessary, and much neater.  Even neater - sear on gas grill.

Remove the lamb and discard all of the fat.   In same pot sautee:

When garlic is soft, return lamb to pot and add

Cover and turn the heat to low.  Cook for at least an hour and thirty minutes, turning the shanks every half hour and  adding more water if liquids run low, until the meat is very tender - nearly falling off the bone.  Avoiding or spooning away the accumulated fat, remove lamb from liquid and place on a carving board. Garnish with with fresh rosemary and serve with: I sometimes make this sauce without the pear as shown in photo at left.

Stir until the onion is well coated then add:


[I only recently discoverd that this recipe shares the same name as one from Peg Bracken's I Hate to Cook cookbook, so is probably verbatim or Mom's adaption of Ms. Braken's recipe]

To make sauce combine and heat until jelly melts:

Brown lamb [in in a deep skillet or casserole sized  that lamb shanks just cover the bottom in 2 T olive oil]. Pour off excess fat and pour sauce over the lamb.  Cover and simmer basting once in a while for 1 1/2 hours.

[In a large dish with sides,] broil:

6 lamb shanks on each side 7 minutes

Simmer for a few minutes:

then add and mix well:

Pour mixture over shanks and bake at 350 degrees F for 2-3 hours until tender.

Email ThisBlogThis!Share to TwitterShare to FacebookShare to Pinterest
Labels: lamb