First a digression - skip straight to the recipe if you wish.


Ed and I first ate at Itzocan (now closed) in the East Village shortly after Christopher moved to New York in 2005.  We have returned to this small restaurant (only 16 seats) several times since to enjoy their innovative offerings --- Oaxaca Mexican with a French influence.  When we went there last month as an appetizer I had their "SWEET Corn Huitlacoche Mushrooms Souffle Cake w/Truffle Oil" for an appetizer. Awesome, probably with a high cream content, and  nothing I am going to easily duplicate.   For a main dish I had one of my favorites, a menu constant, "PAN ROASTED STUFFED CHICKEN BREAST with goat cheese, vegetables and red mole sauce".   I was ready to try to do this myself; the problem was finding a good red mole recipe.

Then a few weeks ago Ed and I went to dinner at friends - the food always vegetarian, and always excellent.  As an added bonus I was introduced to a new cookbook/author.  The main course was Chickpeas with Potatoes and Tomatoes based on a recipe in Deborah Madison's cook book, Vegetarian Cooking for Everyone.  I promptly checked this book as well as Madison's The Greens Cook Book out of the library.  And one of the first recipes that caught my eye was a Red Chili Mole recipe - not an elaborate Mole Poblano which contains about twenty ingredients, is the the centerpiece of Mexican Christmas and wedding meals, and often called the national dish of Mexico, but a simple red chili sauce (mole).  Ms. Madison uses this sauce for Goat Cheese Enchiladas with Corn. With this recipe in hand I was ready to give my Itzocan favorite a try.


Mole recipe makes about 2 cups, enough for 6 servings. If not all used, it can be frozen for future use. Recipe for chicken and veggies serves two. 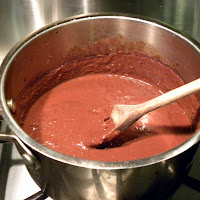 MAKE THE MOLE  (adapted from Vegetarian Cooking for Everyone; I adjusted ingredients based on availibility)


In a dry skillet toast:


Remove to a plate as soon as herbs smell fragarant.  In a 2 quart saucepan heat:


Cook stirring frequently for about 3 - 4 minutes until the onion is wilted and slightly browned, then add the ground spices and cook for one minute more.  Remove from the heat, let the pan cool for a minute, then stir in:


Mix then gradually add 1 1/2 c water.  Return to the stove and bring to a boil, stirring slowly but constantly so that the chili doesn't burn.  It will thicken as it cooks; add an additional 1/4 c water to thin it out if necessary.


Add and stir until it is melted:


Simmer for 10 minutes then stir in: 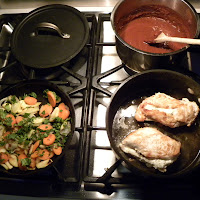 PREPARE AND COOK THE CHICKEN:

then slice lengthwise down the middle, almost but not completely through, to form a large pocket

Place the chicken on a washable plate, plastic cutting board or wax paper and open each piece so the two sides lie flat. Place:

along the full length of each chicken breast, then fold the breast over so it appears as it did before the cutting.

In a skillet large enough to accommodate both/all the chicken breasts heat:

When oil is hot,  place the chicken breasts in the skillet and cook approximately 6 minutes on a side (longer if breast pieces are more than 3/8 # each) until both sides are browned and chicken is cooked through (and temperature is ~160 degrees F).


While the chicken is cooking, in a separate skillet  sautee:


seasonal vegetables; Itzocan's veggies included carrots, onions and zucchini - great when zucchini is in season; when I have made this it was not and of poor quality and expensive so I used:


Cook until vegetables are tender, then add:


Place one serving of veggies on each plate, top with a chicken breast, and put ~ 3 T mole beside the chicken.  Garnish plates with cilantro and serve with extra mole on the side. 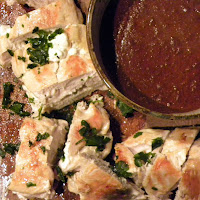 VARIATIONS:  I have also served this without the veggies, most recently with a Mushroom - Arugula Salad. Also, especially if the chicken breasts are very large, they can be sliced crosswise into 3/4 to 1 inch pieces.


It would appear these are not the same herb although some sources say Mediterranean oregano may be substituted for Mexican oregano though the quantity reduced since Mexican oregano is more subtle.  Frankly, given the hotness of the chili I used, I'm not sure my substitution made any difference. I've since found Mexican oregano is available in the dried Mexican chili section in Whole Food Markets


From Cook's Thesaurus: Mexican chocolate = Mexican style sweet chocolate
Equivalents:  1 tablet = 3.1 ounces Notes:  This grainy chocolate is flavored with sugar, almonds, and cinnamon, and used to make hot chocolate and mole sauce. You can buy boxes containing large tablets of this in the Mexican foods aisle of larger supermarkets.  Ibarra is a well-respected brand.   Substitutes:  1 ounce = 1 ounce semi-sweet chocolate + 1/2 teaspoon ground cinnamon OR  (in mole sauces) cocoa powder (Substitute one tablespoon cocoa powder for every ounce of Mexican chocolate called for in the recipe.)


I do not understand the cocoa powder substitution above.  Typically 1 oz chocolate = 3T cocoa powder plus 1 T oil .  I have made the mole both ways: using 3 T baking cocoa (with no additional oil) and 1 oz bittersweet chocolate with pretty much the same results.