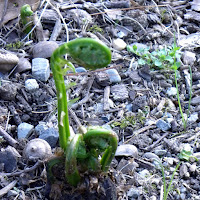 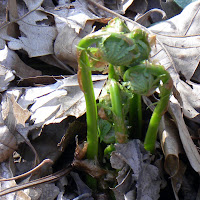 Last week the fiddleheads which I transplanted many years ago started popping up in our yard (top three photos at left). I used to gather fiddleheads and even freeze them since the gathering season is so short: the first and third photos at left are taken less than a week apart. I cooked them with lemon juice and sometimes, taking a cue from an old family friend, served them hot with lemon juice, butter and crisp bits of bacon.  I also cooked them in a marinade of oil, vinegar, spices, fennel and celery and served them cold. Ed does not like fiddleheads prepared any way so in recent years I have stuck with the simultaneously (and longer) in season asparagus. However, wanting to post some recipes, I went on line to verify that fiddleheads could be positively identified by their "U" shaped stem. This was validated in a Cooperative Extension Publication published by the University of Maine:

"Fiddleheads, an early spring delicacy in Maine, are the young coiled leaves of the ostrich fern (Matteuccia struthiopteris). Nearly all ferns have fiddleheads, but those of the ostrich fern are unlike any other. Ostrich fern fiddleheads, which are about an inch in diameter, can be identified by the brown papery scale-like covering on the uncoiled fern, as well as the smooth fern stem, and the deep ”U”-shaped groove on the inside of the fern stem."


This publication, however went on to caution: 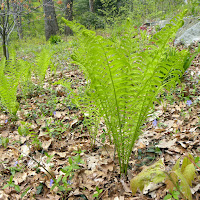 "The Centers for Disease Control (CDC) has investigated a number of outbreaks of food-borne illness associated with fiddleheads. The implicated ferns were eaten either raw or lightly cooked (sautéed, parboiled or microwaved), which was what caused a food-borne illness outbreak in British Columbia in 1990. Although a toxin has not been identified in the fiddleheads of the ostrich fern, the findings of this investigation suggest that you should cook fiddleheads thoroughly before eating (boil them for at least 10 minutes)." 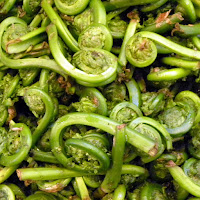 This was news to me so I decided to search further.The Wikipedia post on "Health Effects" is a ambiguous at best giving cleaner marks to the Ostrich fern (what we commonly call "fiddleheads") than other ferns.  Other sites advised cooking well and changing the water at least once while cooking.


Finally,  I consulted my recent purchase, On Food and Cooking; The Science and Lore of the Kitchen (Revised Edition) by Harold McGee. In the few weeks I have had this book I have found it an excellent reference and know I will use it a lot. McGee writes:


"Bracken-fern toxins cause several blood disorders and cancer in animals that graze on this common fern (Pteridium), which is sometime collected in the young "fiddlehead" stage for human consumption. Ostrich ferns, Matteuccia species, are thought to be a safer source of fiddleheads, but there's little solid information about the safety of eating ferns.  It's prudent to eat fiddleheads in moderation and to avoid bracken ferns by checking labels and asking produce sellers." *


He continues: "Long a traditional springtime delicacy, harvested as the fern fonds begin to elongate and unroll but before they toughen, fiddleheads are now a cause for some caution. A common species enjoyed in Japan and Korea, the bracken fern Pteridium aequilinum, has been found to contain a potent DNA-damaging chemical....  It should be avoided. Stalks of the ostrich fern, various species of Matteuccia are thought to be safer to eat."**


Well Ed wins this round. I didn't purchase any of the fiddleheads for sale at Verrill Farm this morning (bottom photo, above). No recipes to test.

Posted by cookscache at 6:23 PM