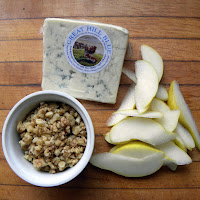 Last week I took my Mom to see the "Chihuly: Through the Looking Glass" exhibit and the new Art of the Americas Wing at the Boston Museum of Art, and she reciprocated by taking me to lunch at the museum's New American Cafe.  I had Flatbread with Great Hill Blue Cheese, Pears and Maple Walnuts which came with a salad of spring greens.  It was so tasty.... 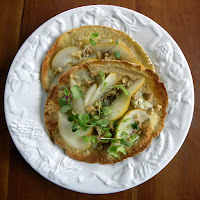 Make a batch or two of Maple Walnuts.

Separate the two sides of :

a piece of pita bread

Place the bread on a cutting board.  Place one hand firmly on the bread and with the other hand cut around the circumference of the bread with a sharp knife.  Place the two halves on a baking sheet or for a crispier toast, a perforated pizza pan. Lightly spray the bread with: 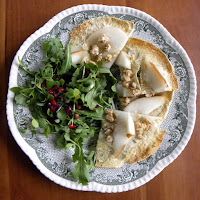 and place in preheated 400 degree F oven.  Cook for about 4 minutes, checking frequently, until the edges just begin to brown. The flatbread I had at the New American Cafe was not as browned or crispy; for a softer bread cook less. Remove from the oven and top each piece, in this order, with: 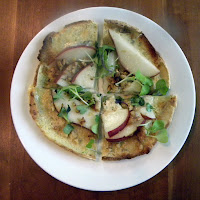 Return to oven for ~2 minutes or until the cheese is well melted and the pears are soft. Remove from the oven and cut in quarters.

Serve topped with greens or micro-greens.