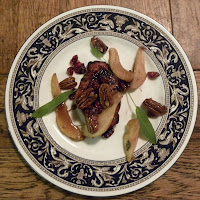 This is my further adaption (adapted in part because I had a several ripe local pears on hand) of Pork Chops with Maple Syrup, Pecans and Dried Cranberries. It is simpler to prepare and uses the grill, instead of the oven.


In a small flat dish (just large enough to hold the pork on one level) combine:

Mix well and pour most of the mixture into a small sauce pan, leaving just enough liquid (about 2 T to evenly coat pork chops on both sides). Place

in the flat dish with the remaining syrup mixture and turn chops until both sides are well coated.

Grill chops until cooked through, approximately 6-7 minutes on a side, depending on thickness, coating with any remaining maple syrup mixture. Remove from grill and let sit while making sauce.

SAUCE: Warm the maple syrup mixture that was placed in the saute pan and then add:

cook for 2 minutes and then add:

and saute just until pear is tender.

Place one chop on each of two plates, top with the sauce and garnish with a few sage leaves.


VARIATION: Use thinly sliced apples instead of pears.

Posted by cookscache at 4:24 AM

Email ThisBlogThis!Share to TwitterShare to FacebookShare to Pinterest
Labels: pork