This is an entry I have been meaning to do for a long time... ever since Ed and I got back from Kauai on January 21st (2009). This was my first trip to Hawaii, and Ed's first to Kauai (though he had been to other islands on business). He has instrumentation in Kauai but he seldom installs his own stuff, especially in desirable travel locations:-( It was a spur of the moment trip.  We were delightfully tired from a house full of family over the holidays and house bound in sub-zero weather.  Ed discovered we could use miles for tickets to Hawaii and that there was an opening at a bed and breakfast friends of ours enjoy almost every year.  Perfect timing! We were blessed with absolutely awesome weather, Waimea Canyon was not engulfed in fog as it so often is this time of year, and we accomplished all we wanted and more in just a week's time.

The first day I was up early (as most of the trip, never fully leaving mainland time) and treated to spouting whales not far off shore from the beach near our bed and breakfast, Po'ipu Plantation, which was recommended by friends. They suggested we stay in the 4 bedroom "main house" which has a wonderful porch and dining area where an excellent full breakfast with lots of tropical fruit and juice is served every morning. We spent the day hiking the Nu'alalo Trail to Lolo Vista (3.8 miles each way). As with many trails in Waimea Canyon, this trail starts at the top and goes down (1,426 feet) and since it was wet making the red mud very slippery, I could not have done it without my hiking poles. The views of the Na Pali Coast from Lolo Vista are spectacular. Given our late start, we opted to retrace our steps rather than continuing on a considerably longer loop option via the Awaawapuhi Trail. Since the warm winds and sun dried out the mud to some degree and we were going up-hill the return trip was easier. We joined friends for dinner at the Hyatt's Yum Cha! (now closed) which offers a good selection of small and large plate Asian cuisine and local draft beer, both at reasonable prices.

Day 2 began with a drive along the North coast with a stop at Kilauea Lighthouse where we saw lots of white colored shore birds including red-footed boobys. We drove on to Hanalei, getting sushi take-out, at the Dolphin Fish Market on the way into town, which we ate on the shore of the bay. We then drove on to the "end of the road" at Ke'e beach where we watched the exceptionally high waves thunder in. As is not unusual for this time of year, most all of the beaches were closed because of treacherous conditions. A stop at the Wishing Well for shaved ice and a walk down to and along Secret Beach completed our day. We had dinner at Roy's which we thought was over-rated and over-priced and would not recommend.

Day 3 we stayed close to our bed and breakfast hiking along the coast to Mahaulepu beaches (Gillins and Kawailoa Bay). It was windy with a a few isolated showers, but warm enough for us to enjoy a swim at Kawaiola Bay. We saw several whales off-shore.

Day 4 was more ambitious, we returned to Waimea Canyon and hiked the Pihea Trail (1.8 miles each way) to the Alaka'i Swamp Trail (2.0 miles from intersection to the end). The trail was steep, wet and slippery at the beginning, again going down at the start, but as the going becomes muddier, boardwalks appear and the last part of the Pihea Trail and most of the Swamp Trail are on boardwalks. The wire mesh that covers most of the boardwalks has come loose in many places and presents a tripping hazard. The view from the end, Kilohana Look-out, gave us absolutely spectacular views of the north shore and Hanaleli Bay 4, 000 feet below. We were lucky, however, as the view cannot be assumed this time of year as the weather tends to be very foggy in the canyon and on the North Shore. We had dinner at Plantation Gardens, an old manor house with interesting antiques set in beautiful tropical gardens. We had pan seared local fish on a salad bed of arugula, mango and papaya topped with an avocado-cilantro mousse and lilikoi cider vinaigrette - delicious. Some variations have and others will be included in this blog. 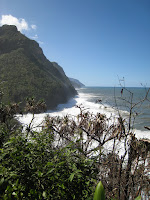 Day 5 was another hiking day. We got up early (one drawback of Po'ipu Plantation is that breakfast is not served until 8) to drive to Ke'e Beach at the end of the North Shore to hike the first part of the Kalalau Trail to Hanakapi'ai Beach (2 miles to the beach).   We had a wonderful hike up and down along the coast to the beach which was being pounded by incredibly large waves. After watching one hiker fall in with boots and full gear, we removed our boots and crossed the stream. We started up the 2 mile trail to Hanakapi'ai Falls but after crossing the stream again and then coming to a crossing that was much deeper, we decided there was too much water in the stream to continue. On the way home we stopped at Queen's Bath and at Kiahuna Beach to watch the sunset. Dinner at the Beach House, macadamia crusted fish, was good but not spectacular.

On day 6 we had another awesome trip to a still clear Wiamea Canyon this time taking the Canyon Trail to Waipo'o Falls. Enroute we met an interesting local who pointed out goats along the Canyon walls and told us about hunting pigs with "dog and knife". The falls, a smaller and one larger (800') fall, are visible from the west side of the Canyon but not from the end of the trail (except for the very brave) which ends at the top of the large falls. After our hike we tried to go to Polihale Beach, but as we heard might be the case, the gate was locked due to washed-out roads. We watched the sunset from Salt Pond beach then returned to our favorite restaurant of the trip, Plantation Gardens for dinner.

Our last day started by watching the Obama inauguration before breakfast.  Since the day was hot and sunny we opted to repeat the beach walk we did on our third day, again enjoying the swimming and seeing many whales off-shore and a carefully protected monk seal on the beach.  We shower then head for a last dinner at Yum Cha! and our red-eye home. Awesome trip.

Posted by cookscache at 5:29 AM