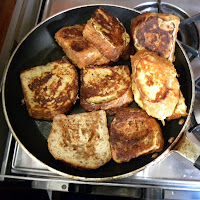 Known in other circles as "French Toast", boat toast was the breakfast of choice (no toaster on board) when Ed and his sister Alison were cruising with their parents aboard Alised. Boat toast has likewise become a favorite breakfast aboard Condor. Most often made from a random assortment of bread about to go stale (When crusing, I never know when we might find the next bread supply so I tend to over stock.) This is truly awesome when made with fairly think chunks of a baguette (as shown in the photo at left). I so casually mix the milk and eggs that in preparation for actually writing this recipe I consulted Mark Bittman's How to Cook Everything (original edition/1998) for a more professional ratio. 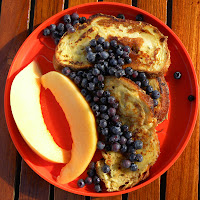 If you like very mushy French toast and tend to soak the bread rather than dip it, you will need more batter than this. Also since the size and absorbency of bread differs greatly it is hard to predict exactly how much batter will be needed; I tend to add more milk and or egg as needed as I am soaking the bread.

In this egg and milk mixture, start soaking:

6 or more pieces of bread, depending on size (figure 1 1/2 to 2 pieces of regular bread per person or 3 - 5 baguette slices, depending on the bread diameter and the ages and appetites of your crew))

Soak so that the mixture throughly permeates the bread.

Coat the griddle with:

Butter, butter alternative or olive/peanut oil and then place the soaked bread on the griddle. Sprinkle:

on top before turning the bread and then sprinkle more cinnamon on the other side. Cook until nicely browned on both sides, adding more butter/oil when turning the toast to re-coat the griddle.

Serve hot with maple syrup.  Even better when topped with Maine blueberries too.

Posted by cookscache at 9:55 AM