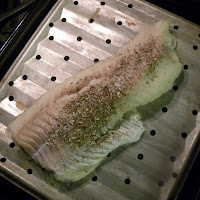 When my Dad, Ja came East from Colorado, he always looked forward to three things: fishcakes, cod and, of course, lobster and clams. I had not yet discovered the recipe for Cod with Roasted Veggies so I prepared plain cod with herbs. While I made this for Dad, I used Herbes de Provence pour Poisson which I had found in a market in Nice.  Dad liked it "crispy" and when preparing the cod for him, I cooked it much longer, often broiling it at the end, than I would otherwise do.

When buying the Cod, if you ask for "Hotel" or "Captain's cut" the fish should be of uniform thickness (but often more expensive). If the fish is uneven thickness, fold thin piece(s) under to make as equal in thickness as possible.

On the top of a broiling pan that has been lightly coated with olive oil place:

Sprinkle the fish with

Bake at 400 degrees F, approximately 15 – 20 minutes*, depending on thickness of fish, until fish is opaque and flakes easily with fork. Note: In his cookbook Fish Mark Bittman advises starting the fish on broil and cooking less time,  “(figure about  8 to 10 minutes per inch of thickness, measured to the thickest point). If the fish is cooking too quickly, turn off the broiler and finish cooking with the oven set at 500 degrees F. Cod begins to “gape” – its sections separate – when it is done, is opaque throughout, and will offer no resistance to a thin-bladed knife; avoid overcooking."

*CHECK AFTER 10 minutes to see how done the fish looks (see criteria above).

Remove fish from oven and place on warm platter to serve.