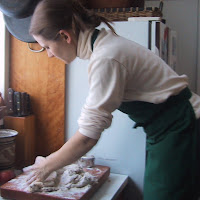 FIRST be sure that the water temperature is within the suggested range on the yeast package (too hot and the yeasties die, to cool and the bread won’t rise), then stir together in a large meassuring cup:

Let stand until dissolved. Then proof the yeast* - add 1 t sugar and wait 10 minutes. It should double in volume.

To the yeast mixture add:

If using an electric mixer, switch to dough hook, then very slowly mix yeast mixture into the butter mixture, then add:

Begin adding, 1 cup at a time until the dough becomes too difficult to stir:

Turn the dough out on a floured surface and knead until smooth, adding enough additional flour to make a soft but not sticky dough.

Butter a large bowl; shape the dough into a ball and place in the bowl. Cover with a dish towel and let stand in a warm place until doubled in bulk, about 2 to 2 ½ hours.

Punch down the dough and divide into two parts. Press one piece of the dough out with your hands (or rolling pin) into an oval shape about 12 inches long and 8 inches wide. Fold one of the long sides about two thirds over, overlap with the other side and press down firmly. Alternatively, and this is the method we traditionally use: roll to ~18 inches rather than 12 inches and  cut the oval into three equal strips and braid. Repeat with the remaining dough.

Place the two pieces of dough on a baking sheet as far apart as possible. Cover with a dishtowel and let rise for 45 minutes. Preheat the oven to 350 degrees F.

Bake until breads sound hollow when tapped on the bottom, about 45 minutes. Check periodically and  IF breads brown too quickly, cover with aluminum foil . Cool on a rack. Sift:

over the tops before serving. 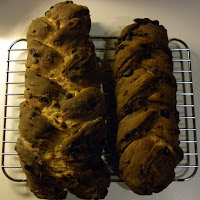 Unlike Alexandra, who usually makes the stollen when she is home for Christmas, I am not an experienced bread maker. My main hang up on making bread has been getting the water the right temperature so all the little yeasties don't die; I am very careful to proof the yeast.  But I really blew it this year on the kneading.  For starters I made the stollen using the stand mixer (previously I had used the food processor) and not realizing there was a "dough hook", used the paddle (potato masher) attachment.  I did not use the maximum amount of flour (just a little over 5 cups) but when I turned the dough out on the board I found loose flour in the bottom of the mixing bowl.  I kneaded most of this into the dough, but apparently not enough.

I was disappointed the bread did not seem to rise and really knew something was wrong when I went to "punch" the dough.  Growing up, Alex and Topher always vied for this honor - punching the big yeasty mound to knock out the air. No air this time.  Made the stollen anyway and it came out more like a biscotti (OK dipped in coffee) than a stollen.

Next time around I still used the paddle (did not discover the hook attachment until Alex, Dan and Chris made pasta on the 26th) but used just 5 cups of flour and kneaded for a long time making sure all the loose flour from the bottom of the mixing bowl was well incorporated into the dough. One of the loaves from the second try is shown on the left in photo above, first attempt on right. First and second attempt rises shown below: 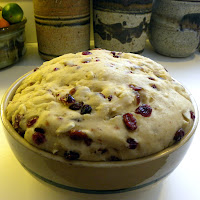 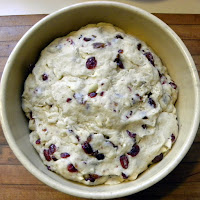 Alex punching the dough from the second attempt and forming the stolen: 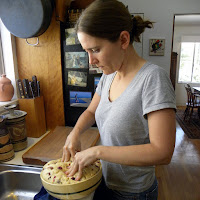 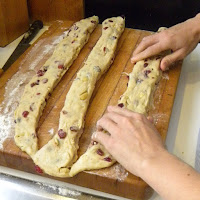 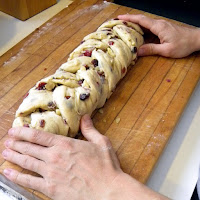 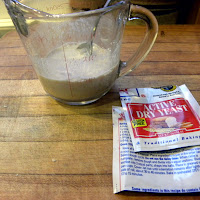 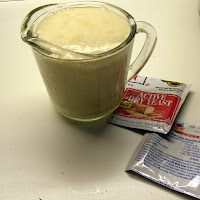 
** It is hard to give a definitive amount of flour since  "flour varies greatly in its ability to absorb moisture due from differences from harvest to harvest, sack to sack, as well as month to month as the humidity changes and the flour absorbs or releases moisture". For example, I used 5 2/3 cups of flour total (includes the first cup added) in the stollen I made in December 2012.