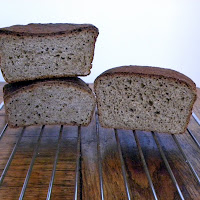 The first loaf of Moosilauke Whole Wheat Batter Bread I made was a disappointment (photo left, bottom left loaf).  Tasty, but much denser than the bread we were served at the Moosilauke Ravine Lodge. So off to the library for bread books: The Bread Bible by Rose Levy Beranbaum and the original source of this recipe, Bernard Clayton's New Complete Book of Breads.  If you are really interested in bread making  check out one or both of these books; don't rely on the wandering novice notes below.
NOTE: Quantities below are for one loaf or half the recipe. 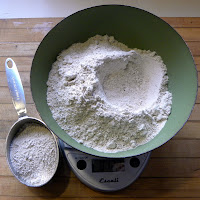 When I first made this bread, I sensed the dough was a bit stiff,  my first instinct was to add more water, but since this was the first time I had made this bread I decided to follow the recipe exactly. "Three cups of flour" turns out not to be so exact. In Cool Tools I wrote about the benefits of weighing flour.  In The Bread Bible, Ms Beranbaum provides detailed measurement conversions for flour. Her chart notes:

For her recipes, Ms Beranbaum defines flour volume as "measured by dipping cup used for measuring solids into the flour bin and sweeping off the excess with a metal spatula or knife" (2)

Mr. Clayton writes, "The amount of flour given is only approximate because flour varies greatly in its ability to absorb moisture due from differences from harvest to harvest, sack to sack, as well as month to month as the humidity changes and the flour absorbs or releases moisture.... In the latter stages of mixing dough, add flour sparingly.  It is better to slowly add the last bit of flour to be certain the texture of the dough is just right rather than to overwhelm the dough with flour.  If you do go beyond the point where the dough is soft and elastic, it becomes hard, add water.  The dough will accept it though reluctantly." (3)

For this first loaf (top photo, bottom left loaf), I used the dip and sweep method (which one of the crew members told me Moosilauke uses) or 15.9 ounces of 365 Organic Whole Wheat Flour. The bread was denser and had much less volume than the bread I remembered from Moosilauke.  I tried a few other loaves using less flour (one shown in top photo, top left loaf); the bread was lighter but the top concave.

Finally I got some King Arthur whole wheat flour, the flour the Moosilauke Ravine Lodge purportedly uses, and started again.  I used the dip and sweep method  and found the flour weighed 15.3 ounces. Since King Arthur lists the flour as weighing 34 grams per one-quarter cup or 14.4 ounces/3 cups, I then removed enough flour so the remaining flour weighed 14.4 ounces (photo second from top).  I added water to the lesser amount of flour (mixed with sugar, salt and yeast).  The dough seemed much too sticky so I continued to add flour until I had used all 15.3 ounces.   Writing about "too-soft dough" Mr. Clayton states "The combination of flour and kneading will give the dough sufficient body to stand alone on the baking sheet. Test it by slapping your open hand against the ball of dough. Leave it there for the count of ten.  If your hand comes away clean you have enough flour." (4)  Since this is a batter in a pan bread, not a kneaded stand-alone loaf, I used a batter that still had a bit of stickiness to it - small pieces would attach to my hand but the batter was not overly sticky. 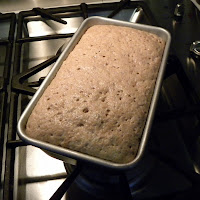 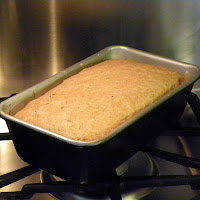 Note photos of the bread after it has risen. Higher ratio of water ( photo top left) resulted in small bubbles (and concave top after cooking), while less water (photo middle left - first "successful loaf") resulted in a smoother finish (and convex top after cooking). The first loaf (photos below) which also had fewer bubbles did not rise as much/double in size. Turns out I was probably pretty close to the right flour:water ratio the first try.  Maybe the room was too cold for the bread to rise properly, maybe the convection oven.... the loaf (lower right photo) was dense and low volume, but it had a convex top. 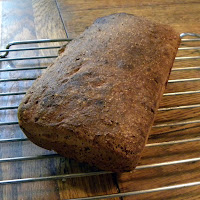 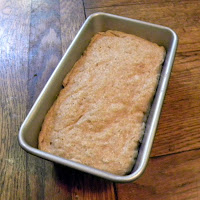 Active dry and instant dry yeast are the two best yeast options for breads on this blog to date. In On Food And Cooking, Harold McGee differentiates between these two forms:

"Active dry yeast, which was introduced in the 1920s, has been removed from the fermentation tank and dried into granules with a protective coating of yeast debris.  The yeast cells are dormant and can be stored at room temperature for months.  The cook reactivates them by soaking them in warm water 105 - 110 degrees F/41 - 43 degrees C ["proofing"] before mixing the dough. At cooler soaking temperatures, the yeast cells recover poorly and release substances that interfere with the gluten formation (glutathione)" [At higher temperature the yeasties die].

Making this bread I used Fleishmann's Active Dry Yeast.  Per the recipe, I did not proof the yeast but added it to the dry ingredients as I do in making  No-Knead Bread.  But in No-Knead bread I use Rapid Rise/(instant) yeast which does not call for proofing. Both Ms Beranbaum in The Bread Bible, and Mr. Clayton in Bernard Clayton's New Complete Book of Breads state their preference, except when a sour flavor is desired, for instant/quick rising yeast.  Ms Beranbaum does add "Active dry yeast, with its higher amount of dead yeast cells, is favored by pizza dough makers because the dead yeast cells contain glutathoine, which relaxes the gluten bonds, adding further extensibility - making it easier to stretch out the dough.  Dead yeast cells add a desirable flavor as well." (6)

In his book, republished in 1987, Mr Clayton writes "Because the new fast-rising yeast cannot be found everywhere in the United states, recipes in this book [including the Whole Wheat Batter Bread] have been developed for the conventional dry yeast with the liquid between 120 and 130 degrees [when mixing dry active yeast to proof, the liquid should be 105 - 110 degrees F]. In almost all of the recipes the yeast is mixed with the flour before the liquid is added.... if the bread is prepared with a new fast-rising yeast and at the recommended higher temperatures, the rising time should be reduced by half." (7)

Unlike Mr. Clayton who holds the quantity of yeast constant and reduces rising time, Ms. Beranbaum states "sometimes you will see it [instant yeast] called 'rapid-rise.' I see this as a misnomer, because used in correct portion, it does not speed the fermentation of the dough (which would be undesirable for full flavor development).  Because of the manufacturing process, there are fewer dead yeast cells in instant yeasts than in active dry yeast.  This special process also enables the yeast to 'wake up' more quickly and makes it possible to use less yeast." (8) The No-Knead Bread which has an incredibly long (18 -24 hour) rising period offers an option of more yeast, less  time.  Since the Whole Wheat Batter Bread only requires 30 minutes of rising time it makes more sense to reduce the amount of yeast (.67 times the weight of active dry yeast).

After making several loaves of this bread, I found the texture improved but I could not produce a loaf with a convex top.  When I cooked the bread, the loaf collapsed resulting in a concave top.  Back to the books. Ms. Beranbaum writes, "Volume is determined by oven spring, which takes place during the first third of the baking cycle, when the rate of fermentation rapidly increases, until the heat kills the yeast.... The goal is to delay the formation of the crust until the gases have accomplished their work so the dough can expand to its full capacity. One way to achieve this is by steaming the oven." She also advises not to use a convection oven, at least for the beginning cycle of baking as it will blow out the moisture." (9) Whoops. I had been using a convection oven and not introducing any steam.  I switched to my regular oven, and using one on Ms. Beranbaum's suggested methods added ~6 ice cubes to a preheated pan when I placed the bread in the oven.  Still a convex top with the higher water content, but using the dip and sweep (15.3 ounces of flour per loaf) I finally got results that were comparable with the Moosilauke bread (top photo, right loaf)!  In retrospect the "steaming" may be unnecessary - stay tuned.

Posted by cookscache at 8:20 AM