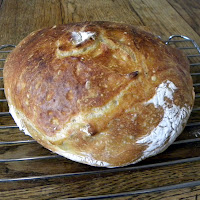 Ed came home from a visit to Colorado two years ago raving about a friend's bread.  "It's the best bread I've ever had, and Cecile says it's so easy to make.  You have to get the recipe!"  I did. Cecile kindly shared the  recipe, adapted from Jim Lahey/Sullivan Street Bakery, she had gotten from the November 8, 2006 issue of the New York Times. It sat in my recipe file until last December when Ed and I both visited Cecile and David and  I was treated to some of this awesome bread.  I retrieved the recipe and tried to make the bread as effortlessly and with such amazing results as Cecile.  I had mixed success making it this winter in Colorado, perhaps because I used high altitude flour instead of the regular bread flour which works well for Cecile at 5,400 feet. I tried at ~sea level with bread flour and it came out quite well.


The reason it is so simple to make is that time replaces kneading.  In his article,"The Secret of Great Bread: Let Time Replace the Work" in the same issue of the New York Times, Mark Bittman writes," I asked Harold McGee, who is an amateur breadmaker and best known as the author of “On Food and Cooking” (Scribner, 2004), what he thought of this method. His response: 'It makes sense. The long, slow rise does over hours what intensive kneading does in minutes: it brings the gluten molecules into side-by-side alignment to maximize their opportunity to bind to each other and produce a strong, elastic network. The wetness of the dough is an important piece of this because the gluten molecules are more mobile in a high proportion of water, and so can move into alignment easier and faster than if the dough were stiff.'"  If you decide to make this bread, first read Bittman's article.

Be advised that time is an ingredient and bread needs to be made ~18 hours + 2 hours for an additional rise before cooking.  Cecile sometimes trades yeast (whole package of Rapid-Rise instead of 1/4 t) for time (4-6 hours for first rise instead of 12-18). Still no-kneading, but additional yeast will give the bread a different taste. 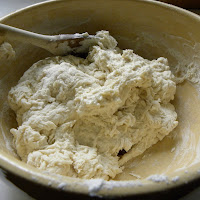 In a large bowl combine: 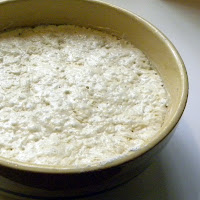 Stir until blended; dough will be shaggy and sticky. Cover bowl with lid.  Let dough rest at least 12 hours, preferably about 18, at warm room temperature, about 70 degrees.

Dough is ready when it has at least doubled in size and surface is dotted with bubbles. Follow one of the two methods below: 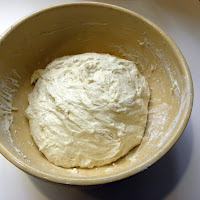 EASY METHOD
The "easy method", favored by Cecile is to leave dough in the same bowl and put a little flour on the dough and fold it over on itself once or twice. Cover dough loosely with plastic wrap and let rest about 15 minutes. Using just enough (1 - 2 T total for both steps) flour to keep dough from sticking to your fingers, gently and quickly shape dough into a ball.  Cover with a cotton (not terry cloth) towel and let dough rise for about 1 1/2 to 2 1/2 hours. NOTE: If using this method be sure there is enough flour (wheat bran or cornmeal) on the top of the dough (the part that will become the bottom of the loaf in the pot) to keep the dough from sticking to the bottom of the cooking pot.  I sometimes even put a thin coat of olive oil on the bottom of the pot just before adding the dough.

BOARD METHOD
This is the method used in the NYT recipe.  Lightly flour a work surface and place dough on it; sprinkle it with a little more flour and fold it over on itself once or twice. Cover loosely with plastic wrap and let rest about 15 minutes. Using just enough flour to keep dough from sticking to work surface or to your fingers, gently and quickly shape dough into a ball. Generously coat a cotton towel (not terry cloth) with flour, wheat bran or cornmeal; put dough seam side down on towel and dust with more flour, bran or cornmeal. Cover with another cotton towel and let rise for about 2 hours. 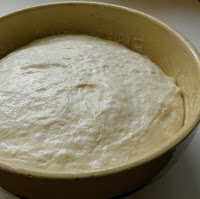 When it is ready, dough will be more than double in size and will not readily spring back when poked with a finger. 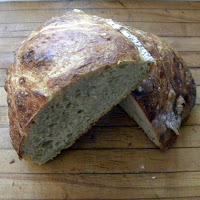 At least a half-hour before dough is ready, heat oven to 450 degrees. Put a 6- to 8-quart heavy covered pot (cast iron, enamel, Pyrex or ceramic) in the oven while it heats. I use a 6 quart enameled cast iron pot  9 1/2 inches in diameter and 5 inches high. When dough is ready, carefully remove the pot from oven. Turn the dough out of the bowl into the hot pot or, if using "board method" slide your hand under towel and turn dough over into pot, seam side up; it may look like a mess, but that is okay. Shake pan once or twice if dough is unevenly distributed; it will straighten out as it bakes. Cover with lid and bake 30 minutes, then remove lid and bake another 15 to 30 minutes (in my convection oven I find an addition 10 minutes is enough), until loaf is beautifully browned. Cool on a rack. 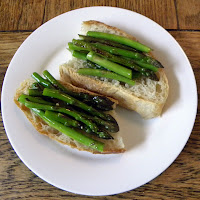 I made a loaf this spring during asparagus season.   The bread cried out for oilve oil so instead of boiling/steaming the asparagus as I usually do for sandwiches, I sauteed the asparagus in olive oil. What a treat!

Posted by cookscache at 7:04 AM

Email ThisBlogThis!Share to TwitterShare to FacebookShare to Pinterest
Labels: breads/muffins