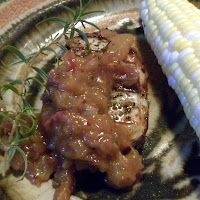 It's midsummer and it was pointed out at dinner last night that we had been having many of the same, albeit seasonal, things over and over again. Time to try something new.  Browsing through the August issue of Bon Appetit I came across "Pork Tenderloin with Plum Chutney".  This is a very loose adaption which blanches the plums, and uses less dark brown sugar instead of more light brown sugar, red wine vinegar instead of Sherry or apple cider vinegar, grainy mustard instead of mustard seed, no bay leaf or Kosher salt and boneless pork chops instead of pork tenderloin wrapped in pancetta. My critical eaters said it was a good change :-) 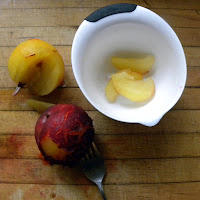 In a sauce pan half full of boiling water place:

Boil for 1 - 2 minutes until the skins on the plums begin to split. Remove the plums from the boiling water, rinse in cold water and pull off the skin. Slice plums and remove pits.  Then cut slices into smaller chunks. 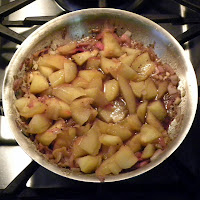 In a small skillet combine:

When the shallots are soft add: 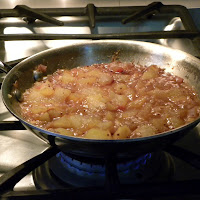 Cook for about 2 minutes until the sauce is well blended, then add the plum chunks.  Cover and simmer over medium heat, stirring occasionally for 8 - 10 miuntes.  Uncover and continue cooking, stirring occasionally until the fruit is soft and the juices have thickened, about 20 minutes. Sauce can be made ahead and refrigerated.  Rewarm slightly before serving.

When sauce is ready or almost ready, sprinkle

3 boneless pork chops, about 1/3 pound each with:

Place the chops on a medium hot grill and cook turning until firm to the touch (145 - 150 degrees F). Center will be slightly pink but moist.  Remember meat keeps cooking after it is removed from the heat source and at 160 degrees F pork will be well done and dry.

Divide the sauce among the three chops and garnish with fresh rosemary.

Email ThisBlogThis!Share to TwitterShare to FacebookShare to Pinterest
Labels: pork