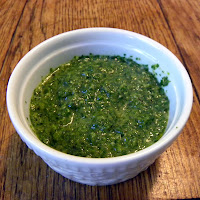 Ed and I first had a sauce similar to this over cod at Sol Azteca in Boston back in the early 1970’s. “Cilantro pesto” has since become trendy and versions can now be found in many cookbooks. This is my version, a result of trying to second-guess Sol Azteca
Note: More commonly in the U.S. the fresh herb (leaves and stems) are referred to as "cliantro" and the seeds as coriander. In Mexico and South America the fresh herb is often referred to as "fresh coriander" 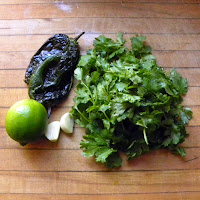 Puree in blender or food processor:


This sauce, like (Basil) Pesto Sauce may be frozen in an ice cube tray wrapped tightly in plastic wrap and thawed in small quantities. 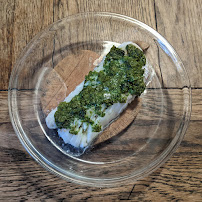 Place a coating of sauce over the fish (white fish or salmon) and bake according to fish type and thickness. Serve with additional sauce.

Grill until done and then serve topped with the coriander sauce.

Grill until done and then serve topped with the coriander sauce.